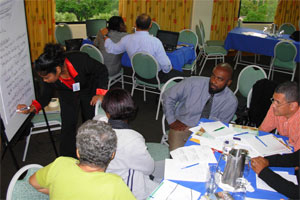 The Pan American Health Organization (PAHO), with support from the Canadian International Development Agency (CIDA), is involved in a CAN $2.5 million five-year project to reduce disaster risk in the health sector of CARICOM member states.

The project aims to improve disaster risk reduction within the regional health sector.

It builds on previous bilateral support from CIDA to the Caribbean and the longstanding relationship between Canada and PAHO/WHO in disaster preparedness, mitigation and response, across the Latin America and Caribbean region.

The project was officially launched in October 2008.

1. Knowledge resources are available and used in the health sector for disaster preparedness and mitigation:

2. The level of safety of health facilities in relation to natural hazards is improved:

3. Disaster risk reduction is incorporated in the agenda of the health sector:

The outcomes and the project as a whole will contribute to Outcome 3 of the Enhanced Comprehensive Disaster Management (CDM) Strategy and Framework. The table below illustrates the link between CDM's outputs and this project's outcomes:

With the financial support of