The Hurricane Season Has Not Ended 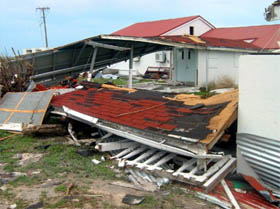 The current hurricane season has brought several tropical storms and hurricanes to countries that have coastlines along the Atlantic Ocean and the Caribbean Sea. So far, there have been fourteen tropical storms in the Caribbean, among them: Emily, Irene and Katia which have caused damage in the Caribbean and United States. The latest, Rina, affected the coast of Cancun, Mexico. In the Pacific, seven hurricanes have been reported: Adrian, Beatriz, Calvin, Dora, Eugene, Greg and Hilary.

This hurricane season is having an activity above normal so it is necessary to review and activate the contingency plans for this type of events that can cause significant damage to communities in the region.

We can not avoid the occurrence of these events; however, preventive measures reduce the risks caused by these emergencies. That is why PAHO/WHO is working together with the ministries of health and strategic partners in promoting the necessary actions to prevent the loss of life and damages.

You may wish to consult the following publications (in Spanish):

More information about the Hurricane Season and contingency plans: