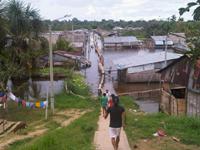 Approximately 200,000 people have been affected by heavy rains that have caused the overflowing of rivers and flooding in Peru. More than 15,000 people have been moved to shelters. Houses, schools and health centers have been damaged in the provinces of Alto Amazonas, Datem del Marañon, Loreto, Mariscal Ramón Castilla, Maynas, Requena and Ucayali.

The rising of the Amazon river has prompted the interruption of water supply services in some parts of the country and the sewage collection network has been seriously affected. In addition, the 113 shelters established for the affected population have reported problems with the storage and distribution of drinking water. Cases of Acute Diarrheal Infections and Acute Respiratory Infections have already been detected.

Peruvian authorities have distributed more than 1,000 tons of humanitarian supplies to meet the basic needs of the affected population. These include food and shelter, kitchen and personal hygiene kits. Since the start of the emergency the Ministry of Health has been providing medical assistance in the affected communities and has put prevention measures in place to avoid outbreaks of infectious diseases such as leptospirosis, malaria, and dengue, among others.

PAHO/WHO continues providing support to national and local health authorities in the response to the emergency and in activities related to strengthening surveillance and control of water quality, waste management, and health promotion for the prevention of diseases. Some of this activities include the strengthening of water treatment for home delivery, fumigation, vector and rodent control, and cleaning of streets contaminated by water.

These activities are part of the water, sanitation and hygiene thematic table, formed to respond to the emergency in the Loreto Region. The members of the table are the Regional Directorate of Health of Loreto, Environmental Health, Plan International, Firefighters United without Borders, UNICEF, and PAHO/WHO.

In this type of emergency, PAHO/WHO recommends that the affected population increase their hygiene practices, including washing hands with soap and water, keeping shelters clean, and paying attention to recommendations regarding safe water consumption.