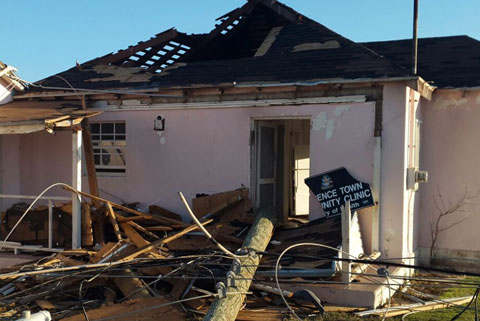 (October 13, 2015) On October 1-3, 2015, Joaquin, a category 4 hurricane struck the Southern Bahamian Islands and directly impacted about 5000 people. The most severely affected islands include Crooked Island, Long Island, Acklins, Rum Cay, and San Salvador and access to these islands became restricted due to the major flooding and debris at the airports and across major roads.

On the five islands, there are six main clinics and ten satellite clinics. Two health centers have been completely destroyed and six heath centers sustained moderate damage and are not operational at this time. Five health centers sustained mild damage but are operational, and the status of the remaining three clinics is unknown. Operations of the majority of health centers have been severely disrupted and face ongoing challenges, including lack of electricity due to non-functional generators, limited availability of potable water, unable to maintain cold chain (a temperature-controlled supply chain), and no communication infrastructure.

Current areas of concern are water quality, sanitation, and vector control. The well water used by many residents (usually not used for drinking) has become contaminated with salt-water, fecal material, and debris from floodwaters which has been a cause for serious concern for water safety and sanitation. Increased mosquito breeding sites have been identified in standing water, uncovered wells, and water storage tanks. Other potential health risks include dengue, chikungunya, and malaria; in addition, an increased rodent population creates a risk for leptospirosis.

Some clinics had damaged roofs and ceilings, while others that were in low-lying areas were affected by storm surges which flooded the electrical wiring, appliances, and medical equipment. A loss of electricity has resulted in the loss of cold chain in health centers where generators were damaged, impacting pharmaceuticals and vaccines. In areas where health centers are accessible, health supplies are limited by weight restrictions and availability of airlifts.