Earthquake in Dominica and Guadeloupe - November 2004

An earthquake measuring 6.0 on the Richter Scale struck the Caribbean island of Dominica on Sunday, November 21, 2004 at 7:41:08 am, local time. The quake caused mudslides in the region that had already been affected by heavy rains over the last several days. Dominica's National Emergency Office in the capital, Roseau, reports that the earthquake affected primarily the northern town of Portsmouth. Search and rescue efforts were hampered by blocked roads from the landslides. Grand Fonds, population 500, was cut off by these landslides.

All the patients from the Portsmouth hospital were evacuated. Some have been relocated to the main hospital in Roseau, others at the doctor's residence in Roseau and others were sent home. Currently no clinic services are being conducted in the Portsmouth area and the Ministry of Health requires assistance to assess the structural integrity of the facility as soon as possible.

PAHO/WHO will support a structural assessment of the hospital in order to make a decision regarding the extent of the engineering work that may be necessary or whether it is feasible to advise the Ministry that it is safe enough for them to continue to utilize the facilities in the interim.

A PAHO/WHO epidemiologist will visit Portsmouth today or tomorrow to assess the impact on the health services.

The same earthquake also caused damage in Guadeloupe, which has been a French possession since 1635. Guadeloupe is an archipelago of nine inhabited islands, including Basse-Terre, Grande-Terre, Marie-Galante, La Desirade, Iles des Saintes (2), Saint-Barthelemy, Iles de la Petite Terre, and Saint-Martin (French part of the island of Saint Martin).One fatality was attributed to the disaster.

The archipelago of LesSaintes suffered the brunt of the earthquake's impact. According to the Mayor, most public buildings were destroyed. Of 200 houses, one-third are completely destroyed and all have cracks (half of them need to be entirely rebuilt).

The Préfet and the presidents of the Conseils Général and Régional paid a visit to the islands and promised some aid. The French Minister for Overseas Territories was meant to arrive on Tuesday in Guadeloupe.

No request for assistance has been made. Three teams, including psychologists, were already on the spot Monday morning.

Photos from the disaster in Dominica 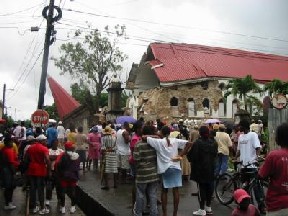 A crowd observing the damage 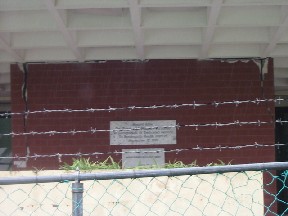 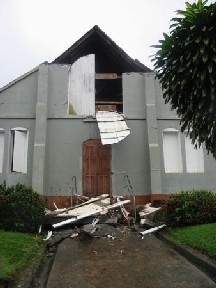 A colapsed structure in Zicack 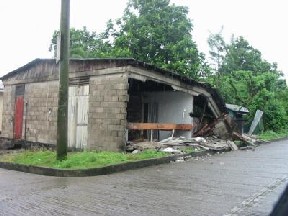 These photographs are courtesy of Ashton Riviere at www.pss.tripod.com/pics. More can be found at his website.