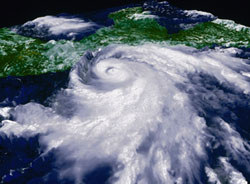 Heavy rains hit the coastal areas of the departments of Sud, Sud-est, Ouest, Grand-Anse, L'Artibonite, and the Northwest of Haiti; however, no major floods or significant damages to infrastructure have been reported.

Two deaths and 3 injured have been reported and 200 people had to be evacuated to relatives' houses.  Nineteen houses have been destroyed and 134 damaged.

Port-au-Prince has suffered minor flooding. According to reports, several localities (Martissant, Gressier and Mariani) along southbound roads were flooded. An evaluation of the Haitian Red Cross and the DPC (Civil Protection) accounts did not find any major damages reported, while the flooding is considered either normal or minor and has subsided since.

Sud Department, coastal area between Port Salut and Tiburon suffered severe wind and rain, but no damages were reported.

Artibonite Department, the population of Nan Manmye, situated north of Gonaives, was evacuated due to rising water levels of the Quinte River.

The tropical storm and flooding warnings have now been discontinued.

EOC of Sud and Sud-est continue to coordinate with all humanitarian actors. Emergency stocks and human resources have been identified at departmental and national levels (United Nations System and NGO).

Ten (10) shelters were identified in the Sud department; however, there is no need at the moment to use them.

The Ministry of Finance has pre-positioned emergency funds in every affected department.

A PAHO disaster expert was able to reach the costal town of Tiburon and other villages in the Sud Department. Although experiencing extensive rains, no evidence of considerable damages or pressing needs were found in this area. At this time, the health assessment will focus on addressing the health needs and access to potable water of the inhabitants of the small island of Ile a Vache, situated just across from Les Cayes.

PAHO and other UN agencies and NGOs will continue to carry out assessments at the department level. At this time there is no need for international assistance.