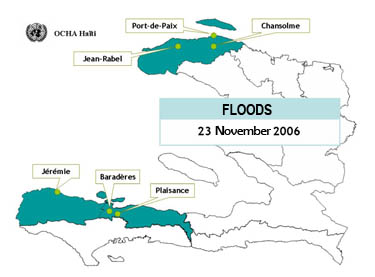 A cold front has caused heavy rainfalls in different parts of Haiti, causing floods in the departments of Nippes, Nord-Ouest and Grand Anse, the last being the most severely affected. The town of Jeremie, especially the lower part situated close to the sea was completely flooded. The communities of Jean-Rabel and Chandsolme in the department of Nord have also been affected.

Haitian authorities provided shelter for 150 people in a school in Jeremie. However, as of 27 November, these people were returning to their houses. The authorities provided food and water to the displaced popultion. Two bodies have been recovered and identified and one person is still missing. Two injured persons received medical care at the St. Antoine Hospital in Jeremie and the displaced people received a medical check up at the school.

St. Antoine Hospital, which was already in poor condition (structure of building and supplies), was severely affected as some sections were flooded, including the operating theatre. A team of soldiers from the Uruguayan Battalion of MINUSTAH (United Nations Mission for the Stabilization of Haiti) helped in the clean up and temporary fixture of the damaged roofing. Thanks to this the Operating Theatre is fully functional again.

The Haitian government has contributed 300,000 gourdes to Jeremie to assist the affected population. Part of this sum (100,000 gourdes) has been used to complement the medical donation of PAHO for St Antoine Hospital.

PAHO, as focal point in Haiti for Health and Water/Sanitation, has been working closely with the authorities and some NGOs based in Haiti in order to evaluate health and water-sanitation needs. With the health needs covered for the time being, efforts are now concentrating on the quality of water in the town of Jeremie. To date, the evaluation has not shown urgent needs, but more data are being analyzed in close cooperation with the Haitian water authority (SNEP Service National Eau Potable). Two NGOs have been rehabilitating the water plant of Jean Rabel and PAHO coordinated with UNICEF so that they can receive aquatabs.

PAHO is also coordinating with the Haitian Health Foundation, a medical NGO that has been actively providing basic health care, and obstetric care in Jeremie for 18 years. HHF is well stocked on medicines and will also continue to provide assistance to cover the health needs in Jeremie. The PAHO team based in Jeremie will continue assisting the health authorities and civil defense.

In the Department of North-West of (town of Port de Paix and Jean Rabel), PAHO have been advising local health partners. In Jean Rabel and its environments, the clinic received a lot of water and the patients had to be temporarily moved (this is a normal ocurrence whenever it rains because of the location of the hospital). The Minister of Health is planning the construction of a new and safer hospital. At this time no intervention is required for Port de Paix, except for the fact that PAHO and the Ministry of Health will conduct a vector control survey in order to see whether stagnant waters need to be fumigated.