Tropical Depression No. 16 Causes Problems at the End of the 2008 Hurricane Season 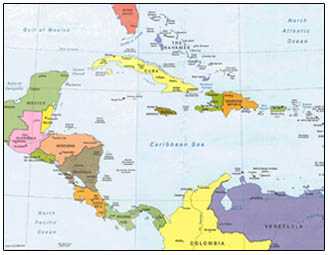 As the 2008 Atlantic Hurricane Season nears its end, rains brought on by Tropical Depression 16 caused flooding in several countries in Central America the last two weeks of October. As of October 27, it is estimated that about 410,000 people have been affected.

Rain during the period of 15-17 October resulted in widespread flooding across several districts in Belize. Flood waters reportedly affected 97 villages, and are expected to continue rising in areas of the Belize, Cayo, Corozal and Orange Walk Districts well into the month of November. Cayo District was highly impacted, and was declared a disaster area by the Prime Minister on 22 October. The floods have caused one death, have affected 40,000 people in 18 communities, and have sent 311 people to shelters. More than 800 homes have been damaged.

PAHO/WHO is providing technical support to the Ministry of Health for water and sanitation, in addition to procuring medical supplies and broadcasting health messages.

Floods and landslides in Parrita, Quepos, Los Santos and the Central Valley in northwest Costa Rica have caused seven deaths and affected 92,000 people. Alta Verapaz reports the highest number of affected people, approximately 13,400, followed by Izabal with 13,000 people. More than 3000 people have sought refuge in 65 shelters. A state of emergency has been declared. PAHO/WHO is distributing emergency health kits.

Widespread floods in departments of Peten, Izabal, Alta and Baja Verapaz, Quiche and Huehuetenango in the north of the country have caused four deaths and affected 45,500 people. Approximately 6800 people are currently in shelters. The government has declared a state of calamity in 27 municipalities. Guatemala requested international assistance on 3 November. 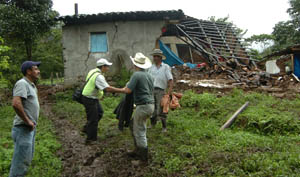 Rain and floods have affected 17 of the 18 Honduran Departments, causing 34 deaths, 16 missing and 279,972 people afflicted. The hardest hit areas are in the northern part of the country and include the departments of Copan, Ocotepeque, Cortes, Atlantida, and Yoro. More than 12,000 homes have been destroyed and 39,725 people are currently in shelters. A national emergency was declared on 19 October. Approximately 150,000 people in Olancho Department are without electricity.

PAHO/WHO has deployed experts on disaster management and the use of LSS/SUMA. The Government of Spain, through PAHO, has released US$ 30,000 for immediate relief.
The United Nations issued a Flash Appeal for Honduras on 29 October in the amount of US$ 17 million.

Flooding in the departments of Chinandega and Leon, in northwest Nicaragua, has caused nine deaths and affected 11,433 people. There are 1,800 people housed in 17 emergency shelters.