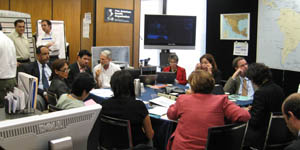 On 29 April 2009, Dr. Margaret Chan, WHO's Director-General, declared Phase 5 of the WHO Pandemic Alert. This announcement was made after the confirmation of evidence of sustained human-to-human transmission in at least two countries in the same region, Mexico and the U.S. In light of this, PAHO has encouraged its Member States to start implementing their national influenza plans. The PAHO/WHO Emergency Operations Center was activated immediately after the outbreak was announced, and has continued monitoring the situation 24/7.