A massive poisoning outbreak by ingestion of home distilled "guaro" contaminated by Methanol were detected on 2 September 2006 in the departments of León and of Chinandega, Nicaragua. Subsequently it extended to several wards of the same city and cases were also reported in other municipalities.

The Ministry of Health has issued the latest data on the methanol poisoning event in León, Chinandega, and Managua. A total of 788 cases were reported, of which 44 persons died between 2 and 18 September. 28 persons remain hospitalized, with 10 of these in critical condition. There have been no deaths reported since 18 September.

PAHO assisted by providing expert help through the Network of Toxicology of Latin America and the Caribbean (RETOXLAC) in order to exchange information and support the toxicologists of Nicaragua and channeling drugs and antidote medicines to the country. 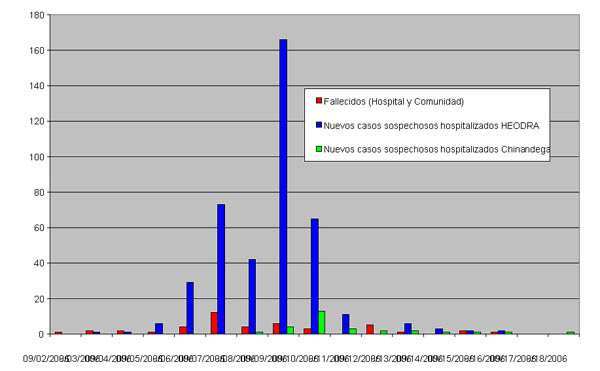 At present, the situation is under control and the number of new cases admitted to hospital and deaths continues to decline. There are currently 68 cases hospitalized of which 8 are considered critical. There have been no reported admissions since September 12 at the main hospital in Leon.

Cases needing haemodialysis are being cared for by the Military Hospital and Fonseca Hospital in Managua. All units catering to the management of critical patients have adequate resources to do so.

In addition, PAHO has assisted the government to have 533 health personnel undergo special training in the management of methanol poisoning.

However, this week is also the Independence celebrations and officials are anticipating a lot of heavy drinking associated with the parties and events.

The health sector in Nicaragua (Ministry of Health and private sector) should have the ability to respond to limited sporadic clusters of Methanol poisoning during the next days, aided in part by the massive seizure of "guaro" throughout the country, particularly in the departments of León and Chinandega.

During the next days the operational challenges are the following: 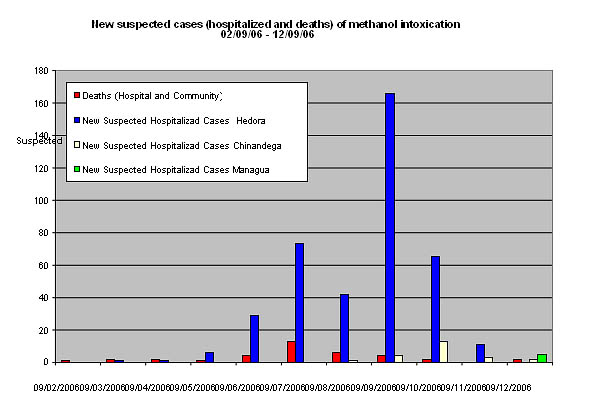 Situation in the Leon, Chinandega and Managua Hospitals
12 September

A massive poisoning by ingestion of home distilled "guaro" contaminated by Methanol has been reported in the departments of León and of Chinandega, Nicaragua.

The first cases are detected on the 2nd September in Poneloya to the west of the city of León, about 55 miles (90km) northwest of the capital, Managua, and subsequently extended to several wards of the same city. More cases were reported on the 7th September in the municipalities of Malpaisillo, La Paz Center and Nagarote. Since the 9th September there have been reported cases in the department of Chinandega. (see map).

The Laboratory of Forensic Medicine of Managua has confirmed the presence of Methanol in 23 samples of hospitalized patients.

Cases of suspected poisoning continue to be reported each day in part due to the massive publicity campaign and the active search for affected persons by the Government.

This chart shows the number of deaths (each day) due to methanol poisoning for the week 2-9 September 2006, a total of 24 deaths; as mentioned above, 11 more deaths have since been reported through 11 September. 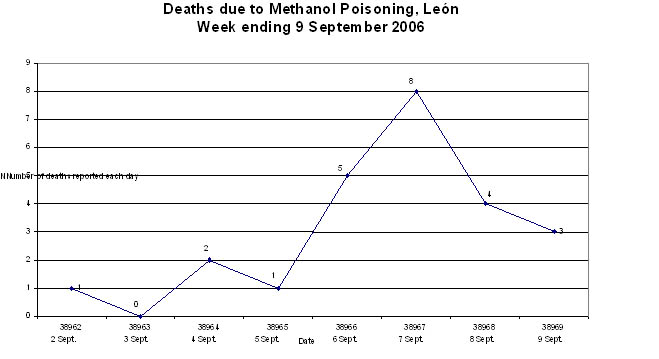 Response to the Emergency

Between 10-11 September, state authorities continued to confiscate home brewed liquor for testing throughout the country. Nearly 13,000 gallons (48,000 litres) have been seized so far.

The PAHO/WHO Office in Nicaragua has supported the Ministry of Health by purchasing medical supplies to deal with this type of emergency:

The PAHO/WHO Office in Nicaragua also arranged for the donation of 300 courses of treatment of Fomepizol (1200 ampoules), which was delivered on 9 September. PAHO/WHO staff are forming health teams to support the Ministry of Health response to the emergency.

Urgent needs identified by the country or PAHO/WHO

Reinforcement of surveillance and intervention capacity in the department of León for the early detection of new cases, the closing of establishments that sell illegal alcohol and a mass communication program.