Washington, D.C., March 28, 2017 (PAHO/WHO)-Brazil is carrying out mass vaccination campaigns for yellow fever in the states of Minas Gerais, Espirito Santo, Sao Paulo, Rio de Janeiro and Bahia, while strengthening surveillance and case management throughout the country since an outbreak of sylvatic yellow fever began in January. More than 18.8 million doses of vaccine have been distributed, in addition to routine immunization efforts.

The Pan American Health Organization/World Health Organization (PAHO/WHO) is providing specialized technical cooperation to the federal authorities managing the outbreak and has mobilized more than 15 experts, including experts from the Global Outbreak Alert and Response Network (GOARN), in disease control, surveillance, virology, immunization and other fields to collaborate with health officials in the affected states. These experts have been operating with field teams in surveillance, response, and control operations in Minas Gerais, Espirito Santo and Rio de Janeiro States.

So far, in the four states with confirmed yellow fever human cases-- Minas Gerais, Espírito Santo, Rio de Janeiro and São Paulo-- all cases have been linked to transmission through the jungle mosquito species Haemagogus and Sabethes. But confirmed cases in humans and monkeys in municipalities close to large urban areas indicate a potential risk of urbanization, and yellow fever activity has increased in ecosystems of tropical and sub-tropical forests that are close to human populations.

Officials are working to contain the virus so it does not spread to cities where it could infect Aedes aegypti urban mosquitoes. Until now there is no evidence of human cases of yellow fever virus infection transmitted by that mosquito.

Case numbers have been declining in Minas Gerais and Espirito Santo, but close monitoring of cases is continuing and Brazil is strengthening its capacity to quickly detect and treat cases of yellow fever. Vector-borne diseases have a seasonal characteristic in tropical areas and it is expected that new cases will diminish during dry and cold weather seasons.

Yellow fever can be prevented by means of an effective, and affordable live attenuated virus vaccine. PAHO/WHO recommends only one dose of the vaccine, which is sufficient to confer sustained immunity and life-long protection against yellow fever disease. The yellow fever vaccine is contraindicated in seriously immunosuppressed individuals. People over the age of 60 should only receive a vaccine after a careful risk-benefit assessment. The yellow fever vaccine should not be given to pregnant women, except those with high risk of infection and situations where there is an express recommendation from health authorities, or to infants aged less than 6 months, or to people with acute febrile illness. 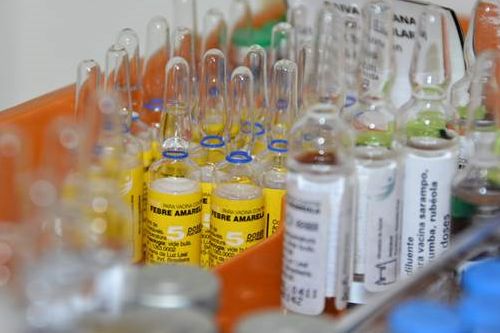 PAHO/WHO currently recommends that countries prioritize, for vaccination, populations living in endemic areas and travelers to these areas, and that they expand vaccination to the routine vaccination of children at the national level if vaccines were available. It is important that countries share YF vaccination coverage estimates at the local level for children and adults in order to inform an accurate risk assessment of the current situation.

Mass immunization campaigns have started in the affected states. Federal public health authorities in Brazil have distributed 18.8 million doses of yellow fever vaccine since January to the states and municipalities in the areas where cases have been reported. These include the states of Minas Gerais, Espírito Santo, São Paulo, Bahia, and Rio de Janeiro.  This effort is in addition to the country's routine yellow fever vaccine programs in 19 states, which included 3.7 million doses of vaccine.

The extra vaccines include 3.5 million doses of yellow fever vaccine that Brazil requested from the emergency stockpile held by the International Coordinating Group (ICG) on Vaccine Provision, and have arrived in the country.  The ICG includes four agencies:  the World Health Organization (WHO), United Nations Children's Fund (UNICEF), the International Federation of Red Cross and Red Crescent Societies (IFRC), and Médecins Sans Frontières (MSF).

Yellow fever in the Americas

Sylvatic Yellow Fever is endemic in areas of 13 countries and territories of the region, including Argentina, Brazil, Paraguay, Bolivia, Peru, Ecuador, Colombia, Venezuela, Panama, Guyana, Surinam, French Guiana and the island of Trinidad. In Brazil, 21 of the 27 states and the Federal District are considered to have areas at risk for Yellow Fever transmission. Globally, 47 countries have areas with endemic yellow fever:  34 in Africa, and 13 in Central and South America. Mass immunization is the most effective way to prevent disease.