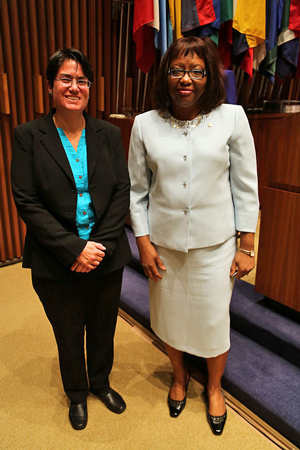 Washington, D.C., 29 September 2014 (PAHO/WHO) — The Pan American Health Organization (PAHO) and The Carter Center congratulated Ecuadorian President Rafael Correa and the people of Ecuador for their country becoming the second in the world to achieve elimination of onchocerciasis (river blindness), as verified by the World Health Organization (WHO). Minister of Health of Ecuador Carina Vance announced the development during the opening session of the 53rd PAHO Directing Council in Washington, D.C.

"This is an important success story for Ecuador and for other countries that are working to eliminate onchocerciasis. It shows what can be accomplished when countries undertake the sustained action that is needed, with strong support from their governments and committed international partners," said PAHO Director Dr. Carissa Etienne.

"Together with The Carter Center and international partners, Rosalynn and I want to congratulate Ecuador for wiping out river blindness, and showing that eliminating this disease from the Americas is possible," said former U.S. President Jimmy Carter, founder of The Carter Center, which works with partners throughout Latin America to eliminate the disease through its Onchocerciasis Elimination Program for the Americas (OEPA). Since 1986, The Carter Center has continued to pioneer multiple disease elimination projects in Africa and Latin America. Ecuador is one of six countries in the Americas that have been working to eliminate onchocerciasis and is the second country in the world, after Colombia, to apply for and be granted verification of elimination of onchocerciasis by WHO, for which PAHO serves as Regional Office for the Americas.

Onchocerciasis is a debilitating disease caused by a parasitic worm that is spread by the bites of Simulium black flies. The disease has an enormous impact. It can cause intense itching, eye damage, and irreversible blindness, reducing an individual's ability to work and learn

In Ecuador, the elimination of the disease posed a significant challenge because Simulium exiguum, the main vector (an insect that transmits a disease or parasite) in the country, is one of the most efficient onchocerciasis vectors in the Americas, comparable to those found in Africa, where the vector is exceptional at transmitting the disease. Ecuador's program had a single endemic focus bordering the Cayapas, Santiago, and Onzole rivers in the northern part of Esmeraldas Province.

"The elimination of onchocerciasis is another step toward reducing poverty in Ecuador, and is a significant improvement in Ecuadorians' quality of life," said Minister of Health   Vance. "Ecuador will continue its fight to eliminate so-called diseases of poverty to achieve a good life for all."

Ecuador's Ministry of Health had distributed the medication ivermectin (Mectizan®, donated by Merck) in Ecuador since 1990. In 2008, a combined 27,372 ivermectin treatments were administered to just over 16,000 people. In 2010, the treatment was halted after transmission of onchocerciasis in the country was successfully interrupted using the regionally recommended strategy of twice yearly community-wide administration of ivermectin and health education programs to all people in the afflicted areas.

An entomological evaluation conducted in 2012 at the end of the three-year post-treatment surveillance period showed that morbidity had been eliminated and transmission of the parasite remained interrupted, i.e., had stopped. Based upon the results obtained, OEPA's steering committee, in consultation with Ecuador's Ministry of Health, suggested the country apply for formal verification of elimination of the disease at WHO, which the ministry did in July 2013. The WHO International Verification Team (IVT) visited Ecuador in May 2014 and presented its report at the end of the visit. On Sept. 22, 2014, based on the IVT report, WHO Director-General Dr. Margaret Chan provided Ecuador with official notification that WHO has verified elimination of the disease.

Elimination of onchocerciasis in the Americas

In the late 1980s, an estimated 500,000 people in the Americas were at risk of onchocerciasis in six countries: Brazil, Colombia, Ecuador, Guatemala, Mexico, and Venezuela. The donation of Mectizan (ivermectin) by Merck stimulated new partnerships and opportunities to fight onchocerciasis. After PAHO declared elimination as the goal for the region using a strategy of mass drug administration, a regional partnership, OEPA, was established to focus on reaching that objective. OEPA was launched in 1993 with funding from the former River Blindness Foundation; The Carter Center absorbed the River Blindness Foundation in 1996. Both The Carter Center and PAHO provide the affected national country programs technical assistance; additionally the Center provides complementary financial support.

In 1991, PAHO Member States collectively resolved to work toward elimination of onchocerciasis by adopting resolution (CD35.R14), and in 2008 through a new resolution (CD48.R12), they set the goal of interrupting onchocerciasis transmission by 2012. This goal was ratified in 2009 as one of a series of targets for eliminating neglected diseases in resolution (CD49.R19).

In 2013, Colombia became the first country officially verified by the WHO as free of onchocerciasis. The governments of Guatemala and Mexico have both eliminated disease transmission, completed their post-treatment surveillance period, and are getting ready to start the official process to request verification from the WHO. Transmission only continues in the cross-border region between Venezuela and Brazil, commonly referred to as the Yanomami area. Interrupting onchocerciasis transmission from this final area in the Americas is the biggest challenge to the regional initiative, particularly due to the scattered migratory Yanomami population, who live in the dense, nearly inaccessible terrain of the deep Amazon rainforest. The Ministries of Health in Brazil and Venezuela are working with The Carter Center/OEPA, PAHO and other partners to meet the goal of eliminating onchocerciasis from the Americas by 2019.

Partners in the effort to wipe out river blindness from the Americas include the ministries of health of the six endemic countries, thousands of community-based volunteers, The Carter Center, PAHO, the U.S. Centers for Disease Control and Prevention (CDC), Merck and its Mectizan® Donation Program, the Bill & Melinda Gates Foundation, the United States Agency for International Development (USAID), the Lions Clubs International Foundation and local Lions Clubs from the six countries, and formerly the Inter-American Development Bank and River Blindness Foundation, as well as several universities in Latin America and the United States.

Today, as a result of country leadership and strong partnerships, the population requiring ivermectin treatment in the Americas has been reduced by more than 95 percent. Progress in the Americas has provided lessons for pursuing elimination efforts in Africa, where more than 120 million people are at risk and hundreds of thousands have been blinded by the condition. The Carter Center assists four countries in Africa in their effort to eliminate onchocerciasis.

About The Carter Center

A not-for-profit, nongovernmental organization, The Carter Center has helped to improve life for people in more than 80 countries by resolving conflicts; advancing democracy, human rights, and economic opportunity; preventing diseases; and improving mental health care. The Center was founded in 1982 by former U.S. President Jimmy Carter and his wife, Rosalynn, in partnership with Emory University, to advance peace and health worldwide.