Washington, D.C.,1 October 2014 (PAHO/WHO) —Delegates to the 53rd Directing Council of the Pan American Health Organization (PAHO) were briefed today on the Ebola in West Africa and chikungunya in the Americas, both rapidly spreading epidemics that show the importance of public health preparedness and response. 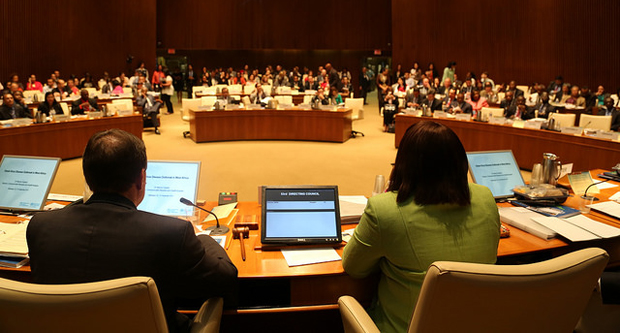 Dr. Anarfi Asamao-Baah, Deputy Director-General of the World Health Organization (WHO), said Ebola is having a devastating impact on Guinea, Liberia and Sierra Leone, with severe economic and social effects in addition to the health impact. Nigeria and Senegal have also been affected, though to a lesser extent. (The Democratic Republic of the Congo is also experiencing an Ebola outbreak, but it is due to another strain of the disease and is smaller.)

"There is every expectation that the epidemic will continue for 6 to 9 months," said Asamao-Baah. "And it will expand beyond where it is now." He added that it could have a negative impact not only on West Africa but on the global economy as well. The epidemic "has ballooned from a public health issue to a much bigger crisis," he said.

Dr. Marcos Espinal, Director of PAHO's Communicable Diseases and Health Analysis Department, noted that, as of 26 September, West Africa has reported 6,574 cases of Ebola and 3,091 deaths. Of these, 375 cases and 211 deaths were among healthcare workers.

"There are no signs yet that the epidemic is plateauing," said Espinal. "The next few weeks will be key." He said the outbreak in Guinea may be "stabilizing," although underreporting of cases cannot be discarded. "This is still a public health emergency of international concern," he said.

PAHO has been working with its member countries to prepare for such events, including the importation of Ebola, which it had warned would most likely occur through air travel. This turned out to be the case in the United States, which reported its first imported case of Ebola this week. The man had traveled from Liberia, but showed no symptoms until several days after his arrival. The patient is in isolation in a hospital in Dallas, Texas, and the U.S. Centers for Disease Control and Prevention (CDC) is working with local health officials to carry out contact tracing and monitoring.

Espinal noted that Ebola is only contagious when patients are actually sick, not during incubation, which can take from 2 to 21 days. This means the U.S. patient's contacts during his air travel are not considered at risk.

With the possibility of another introduction into the Americas, Espinal urged health authorities to keep up their vigilance and continue to prepare, using the core capacity requirements of the International Health Regulations (IHR) as a guide.

"The main objective in the Americas is to contain and prevent the establishment of local transmission following the introduction of Ebola virus disease in a previously Ebola-free country," he told delegates, adding, "Your leadership—of ministers and vice-ministers—is critical for preparedness."

He said good risk communication is also vital "to provide transparent information to the population, because that will build trust." This is essential for "the engagement of the community and local leaders to ensure that interventions are implemented and for public education and community mobilization," he said.

PAHO has distributed a guidance document on Ebola preparedness to its Member States, which will be updated as necessary.

Chikungunya in the Americas

Dr. Sylvain Aldighieri, head of PAHO's IHR and epidemic response team, briefed delegates on the chikungunya epidemic in the Americas. The virus was first introduced into Saint-Martin in December 2013 and quickly spread to other islands of the Caribbean. In July it reached the Dominican Republic, where it has sickened the largest number of people (over 400,000). Local transmission of chikungunya has also been reported in Colombia, Venezuela and Central America. As of mid-September, a total of 737,084 suspected cases had been reported from 21 countries and territories in the Americas.

Aldighieri said the disease has spread particularly rapidly because the region's population lacked any immunity to the disease, due to lack of previous exposure, and also because "the virus is perfectly matched to the Aedes aegypti," the main mosquito vector. Moreover, "the amount of virus circulating in humans and mosquitoes in this outbreak is very high," he said.

Due to the shared mosquito vector, chikungunya co-circulates with dengue virus. It has similar clinical manifestations but a much lower case-fatality rate; most of the 113 deaths reported have been in people with chronic health conditions. The name chikungunya means "bent over" and refers to the inability of patients to stand erect due to pain. Although it is rarely fatal, chikungunya can cause joint pain that can last for months or even years, especially in older adults.

PAHO/WHO has been working with its member countries to prepare for the introduction of chikungunya since 2011, when it collaborated with the CDC to publish the report "Preparedness and response for chikungunya virus introduction in the Americas." Since its introduction, PAHO has been monitoring the spread of chikungunya, organizing training on clinical awareness and case management, and deploying staff and external experts to assist affected countries.

Because the virus is carried by the same mosquito that carries dengue, the basis for controlling the disease is an integrated management strategy for dengue promoted by PAHO.

"All countries with a previous history of dengue are at high risk of chikungunya," said Aldighieri. He encouraged countries that have already experienced the disease to share their experiences and best practices to prepare other countries of the region.