PAHO, OAS and IDB explore joint action on outbreak response in the Americas

Washington, D.C., 18 November 2014 (PAHO/WHO) — The Director of the Pan American Health Organization/World Health Organization (PAHO/WHO), Dr. Carissa F. Etienne, met this week with Secretary-General of the OAS José Miguel Insulza and President of the Inter-American Development Bank Luis Alberto Moreno to explore joint action to strengthen the capacity of countries in the Americas to respond to disease outbreaks and epidemics. 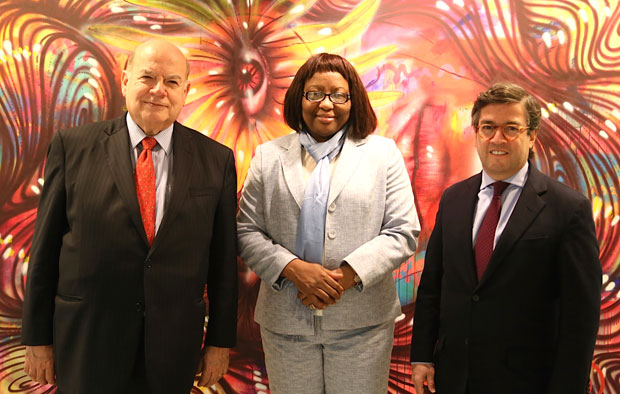 In their meeting, at IDB headquarters in Washington, D.C., the heads of the three inter-American organizations discussed the health and economic challenges posed to the region by new diseases such as chikungunya, which was first detected in the Caribbean in December 2013, and Ebola, which to date has only been reported in one country of the Western Hemisphere, the United States.

The leaders agreed to explore the possible establishment of an inter-American fund for outbreak preparedness, which would support strengthening for surveillance systems and health services to ensure rapid and effective response to outbreaks in the region.

They also agreed that the three organizations would contribute to strengthening country capacities to respond to disease and other health risks in the framework of the International Health Regulations (IHR), an international legal instrument that has been signed by WHO Member States to help prevent and respond to public health risks that can cross borders and threaten countries around the world.