19 February (PAHO/WHO) — The World Health Organization (WHO) is urging affected countries to scale up their investments in the fight against neglected tropical diseases, to improve the health and well-being of more than 1.5 billion people. This investment would represent as little as 0.1% of current domestic expenditure on health in affected low- and middle-income countries for the period 2015-2030. 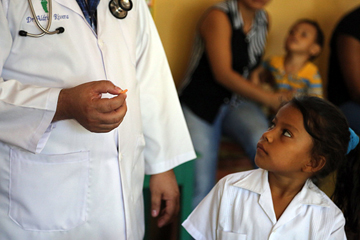 In the Americas, more than 100 million people suffer from one or more neglected infectious diseases, including Chagas, leprosy, malaria, blinding trachoma, and soil-transmitted helminths. These infections cause blindness, disfigurement, disabilities and even death, especially among people living in poverty.

The new WHO report Investing to Overcome the Impact of Neglected Tropical Diseases outlines an investment case and essential interventions to combat these diseases. In the Americas, the Pan American Health Organization (PAHO/WHO) is providing technical cooperation to its member countries to control and advance toward the elimination of several of these same diseases.

"These diseases can be eliminated, and many of them can be addressed through low-cost, integrated actions," said Marcos Espinal, Director of PAHO/WHO's Department of Communicable Diseases and Health Analysis.

A total of 10 diseases have been targeted for elimination in the Americas between 2015 and 2020: lymphatic filariasis, onchocerciasis, blinding trachoma, Chagas disease, malaria, leprosy, congenital syphilis, neonatal tetanus, rabies transmitted by dogs, and plague. Two others—soil-transmitted helminths and schistosomiasis—are priorities for bringing under control. These goals were set by PAHO/WHO's Directing Council in 2009 in alignment with WHO's 2015-2020 roadmap for tackling neglected tropical diseases.

"Sustained commitment and investment by governments, as well as the support of international agencies and other partners, continue to be key for controlling and eliminating these diseases," said Luis Gerardo Castellanos, PAHO/WHO senior advisor on prevention and control of infectious diseases.

Progress in the Americas

Most countries in the Americas have national plans and programs to fight neglected tropical diseases, and PAHO/WHO is supporting their efforts to implement them.