Unsafe foods cause over 200 illnesses

PAHO/WHO recommends preventive action throughout the food chain, from production to consumption, and at home "five keys to safer food"

"From farm to plate, keep it safe" is this year's slogan for World Health Day, observed annually to mark the anniversary of WHO's founding in 1948.

"Diseases caused by contaminated food are a serious problem for people's health and can jeopardize our countries' development, trade and tourism," said PAHO/WHO Director Carissa F. Etienne. "In the Americas, with our abundant food production, we can prevent most of these illnesses with strong food safety systems."

Globalization has increased the interconnectedness of the world's food chains and, in parallel, the number, frequency and sites of foodborne illnesses. Rapid urbanization has also magnified the risks, as people eat more food prepared outside the home, which is not always properly prepared and handled.

In the Americas, about one in four people suffers an episode of foodborne illness each year. Children, pregnant women, immunosuppressed persons, and older adults are the most vulnerable.

"Rapid identification of outbreaks of foodborne diseases and timely and coordinated response are crucial for minimizing the impact of these outbreaks on the population's health and on countries' economies," said Enrique Pérez, PAHO/WHO Senior Advisor on Foodborne and Zoonotic Diseases.

While there are no estimates of the total costs (including medical care, drugs and lost work hours) of these diseases at the regional level, the available data indicate $700,000 to $19 million in annual health costs in Caribbean countries and more than $77 million in the United States.

Food can become contaminated at any point in the food chain, so everyone along that chain must take measures to keep food safe—from producers to processers, retailers and consumers.

In the home and in food establishments, proper handling of food can be assured by observing PAHO/WHO's "five keys to food safety": 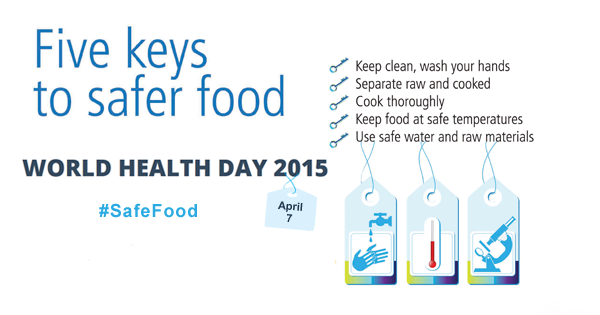 World Health Day event: How safe is your food?

To mark World Health Day 2015, PAHO/WHO and the United Nations Foundation will host a webcast on April 7 from 10 to 10:45 a.m. (EDT) featuring experts who will answer questions about "How safe is your food?"

The webcast can be viewed at www.livestream.com/paho.

PAHO/WHO works with its member countries to strengthen integrated food safety surveillance systems, to ensure strong inspection and control systems to prevent national and international incidents due to contaminated food, and to enhance laboratory capacities needed to protect food safety.