13th annual Vaccination Week in the Americas kicks off in Ecuador

Durán, Ecuador, 25 April 2015 (PAHO/WHO) — More than 2,000 children, adolescents, and adults took part in the regional launch of the 13th annual Vaccination Week in the Americas in Durán, Ecuador, on April 25. The special event was led by the Director of the Pan American Health Organization/World Health Organization (PAHO/WHO), Carissa F. Etienne, and Minister of Public Health of Ecuador Carina Vance.

Vaccination Week in the Americas (April 25 to May 2) has since 2003 reached more than 519 million people throughout the Americas. This year's campaign is targeting more than 60 million girls and boys and men and women in 45 countries and territories with vaccines against measles, rubella, polio, pneumonia and other diseases.

To kick off the week's activities, a nurse from Durán administered the first dose of polio vaccine to a local baby, and a mother spoke of the benefits of vaccination for families, emphasizing the importance of getting children vaccinated so they can grow up health and strong. 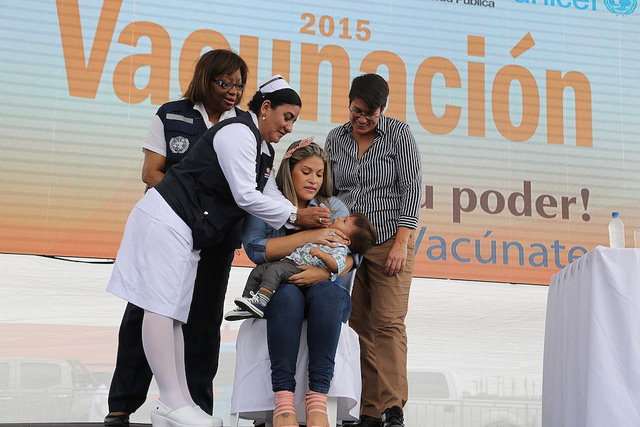 Vaccination is a central component of universal access to health and universal health coverage, to the extent it is accessible to all those who need it. "If we join forces, we can ensure that everyone in the world can benefit fully from immunization, no matter where they're born, who they are, or where they live," said PAHO/WHO Director Etienne. 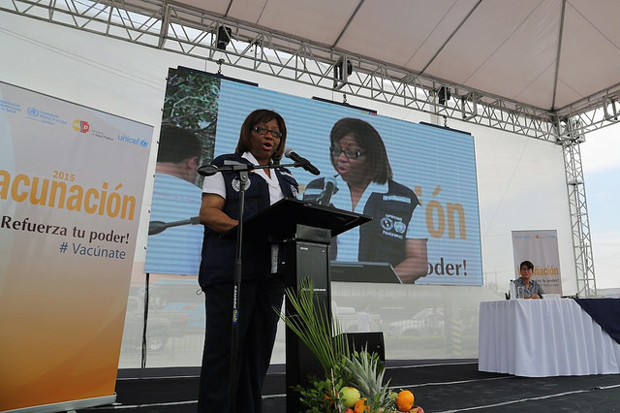 She noted that Vaccination Week in the Americas has evolved into a worldwide health event, having inspired the creation of a similar initiative at the global level. "Today more than 180 countries of the Americas, Asia, Africa, Europe, and the Middle East are joining together as the global community celebrates the fourth World Immunization Week. An estimated 2.5 million deaths are prevented each year thanks to vaccination," said Etienne.

During this year's Vaccination Week, Ecuador is carrying out a special campaign against polio in which children under 6 will receive, free of charge, a dose of trivalent oral polio vaccine, with the goal of maintaining Ecuador free of wild polio virus circulation, in preparation for the final phase of polio eradication worldwide. Minister of Public Health Vance noted that Ecuador has administered some 90 million doses of polio vaccine in the past eight years and in 2014 alone invested some US$69 million in vaccination campaigns.

Vance also noted that her country's national immunization program includes 19 vaccines, among them rotavirus and pneumococcal vaccine. The government has created more than 1,900 immunization units nationwide as well as special brigades that travel to more remote areas of the country. 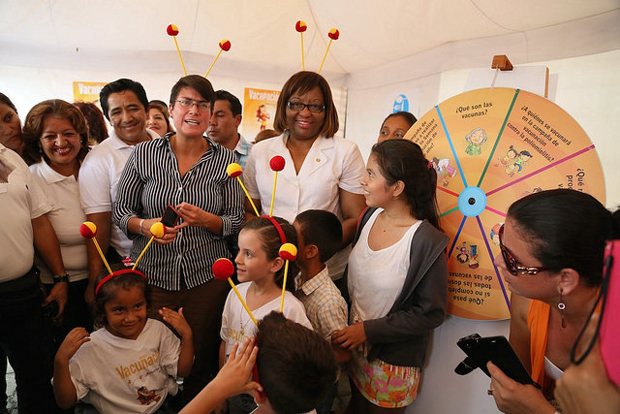 The launch festivities included a health fair featuring demonstrations and educational games about vaccination, healthy motherhood, prevention of dengue and chikungunya, nutrition and obesity prevention, and other health issues.

Participants in Ecuador's launch of Vaccination Week included representatives of the Ministry of Public Health, the Ministry of Economic and Social Inclusion, the municipality of Durán, other public institutions, the news media, the U.S. Centers for Disease Control and Prevention (CDC), the Sabin Institute, the United Nations Foundation, UNICEF, and other U.N. System agencies, as well as the Resident Coordinator of the U.N. System in Ecuador.

In addition to the launch event, PAHO/WHO and the U.N. Foundation hosted a special #GetVax +Social Good broadcast from Ecuador featuring Etienne, Vance and other guests who discussed the benefits of immunization and the history of Vaccination Week in the Americas. The recorded broadcast can be viewed at www.livestream.com/paho.

Also during the launch of Vaccination Week, representatives of PAHO/WHO and Ecuador's Ministry of Public Health signed an agreement for Ecuador to purchase vaccines and other immunization supplies through the PAHO Revolving Fund over the next five years. The Revolving Fund provides key support for regional efforts to eliminate and control vaccine-preventable diseases by helping to ensure the financial sustainability of national immunization programs and by facilitating the rapid and equitable introduction of new vaccines in the Americas.

Becerra said that, thanks to mass immunization initiatives such as those implemented in Nicaragua, the Region of the Americas was the first in the world to eradicate smallpox and to eliminate polio. Nicaragua expects to administer some 1.7 million vaccines this week.

— Vaccination Week in the Americas