Dominican Republic against Measles and Rubella 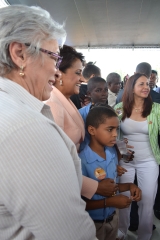 Within the framework of Vaccination Week in the Americas, the First Lady of Dominican Republic, Candida Montilla de Medina y and the Health Minister, Dr. Altagracia Guzmán Marcelino, launched the national vaccination campaign against measles and rubella in the country. The campaign will target around 778,000 children less than 5 years old throughout the entire country.  The vaccination, which has started now and will end on May 15th, is supported by a media campaign.

Dr. Guzman emphasized the political will to support the initiative and encouraged the whole population to go to the closest health center and receive the measles-rubella containing vaccine and deworming medication. Dr Guzman also recognized the Pan American Health Organization/World Health Organization (PAHO/WHO) for their ongoing technical cooperation for the vaccination campaign.

The PAHO/WHO representative, Dr. Laura Ramírez Léon, highlighted the success of Vaccination Week in the Americas, which began in 2003 in response to a measles epidemic between Venezuela and Colombia. The success the Region of the Americas has transcended to the whole world, and this year the fourth World Immunization Week (WIW) will be celebrated.  WIW serves as a framework for initiatives that will take place in the six regions of the World Health Organization (WHO).

Finally, Dr. Ramírez expressed a special appreciation and gratitude to all of the health workers who bring vaccination to everyone with commitment and enthusiasm, despite the heat, distance, and size of the population. She stressed that they are the heroes of the day.