Pooled mechanisms such as the PAHO Strategic Fund can improve access to high-cost drugs in medium- and low-income countries, says PAHO Director

Geneva, May 21, 2015 (PAHO/WHO) — The need for solutions to lower the prices of new or high-cost drugs to ease the burden on health systems was the focus of a May 21 panel discussion with country delegates and experts at the 68th World Health Assembly.

Pooled procurement initiatives can be an effective mechanism for improving access to high-cost drugs in medium- and low-income countries, said Carissa F. Etienne, Director of the Pan American Health Organization (PAHO). She cited as an example the PAHO Strategic Fund, which enables countries to acquire essential drugs and affordable supplies through pooled procurement. 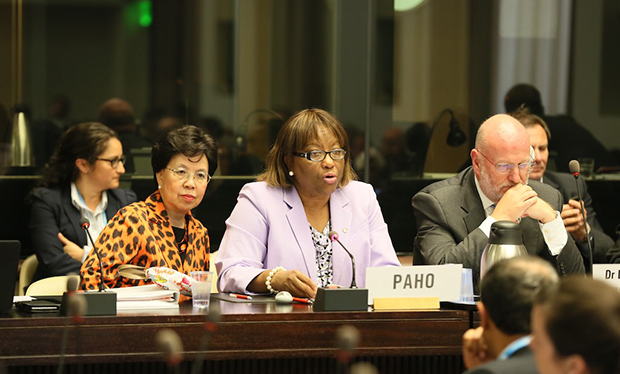 However, using this mechanism can be a challenge for some countries, particularly in light of the fragmentation of the pharmaceutical market, the proliferation of international trade agreements that limit the entry into the market of cheaper generic medicines, and the need to convince manufacturers of the benefits of working with this tool, Etienne acknowledged.

Etienne said that access to safe, quality, and cost-effective medicines for all is an essential requisite for universal access to health and universal health coverage, as it is crucial to the strengthening of health systems. But ensuring equitable access to medicines also poses several challenges for countries, given that medicines account for the highest out-of-pocket expense for health system users. Drug costs can limit the sustainability of health systems, since ensuring access to a small number of new high-cost medicines cuts deeply into national health budgets.

"When our Member States join forces and prioritize action through mechanisms like the Strategic Fund, anything is possible," the PAHO Director underscored. She added that the organization is moving forward to ensure that the Strategic Fund, which now serves 17 countries, continues to include new high-cost essential medicines.

The Director-General of the World Health Organization (WHO), Margaret Chan, contended that if there is no immediate solution to ensure access to those drugs, the health systems in many countries could go bankrupt. Chan also noted that competition helps lower drug costs. She added that it is up to the governments to take more forceful actions in this respect.

Colombian Deputy Minister Fernando Ruiz also participated in the panel. He reported on his country's experience reforming the health system to expand health coverage for the entire population and reduce drug costs. He explained that one of the mechanisms was price regulation, increased competition, and the introduction of new technologies. He noted that challenges still remain, such as defining methodologies for the prioritization of technologies and pooled procurement. He proposed looking into ways for countries to join forces to obtain accessible prices.

Meanwhile, Chilean Senator Guido Girardo said that a medicines policy is vital to all the countries. He advocated policies of prevention to reduce the need to use medicines, and called for reframing the concept of medicines, so that they are not viewed as consumer goods and patients are not considered consumers. He highlighted the actions taken in Chile to address this issue.

— The Americas in the World Health Assembly