Geneva, 22 May 2015 (PAHO/WHO) - An expert panel discussed cancer prevention and control measures that have proved successful in different regions on May 22, during the 68th World Health Assembly in Geneva, Switzerland.

Cancer prevention and control in the Americas have improved with measures such as including the human papillomavirus vaccine (HPV) in cervical cancer control and breast cancer screening programs, as well as strengthening health systems in general, affirmed Carissa F. Etienne, director of the Pan American Health Organization (PAHO), who was invited to participate in this panel. 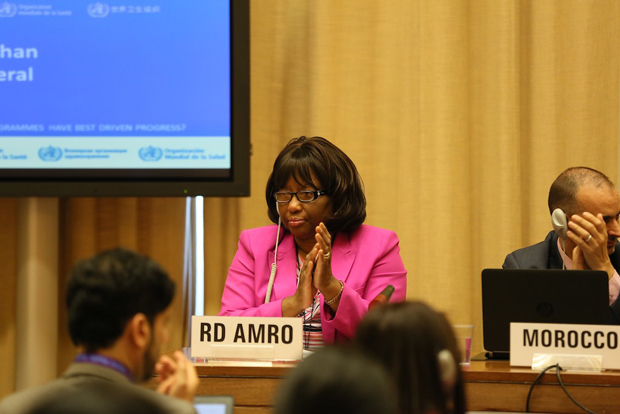 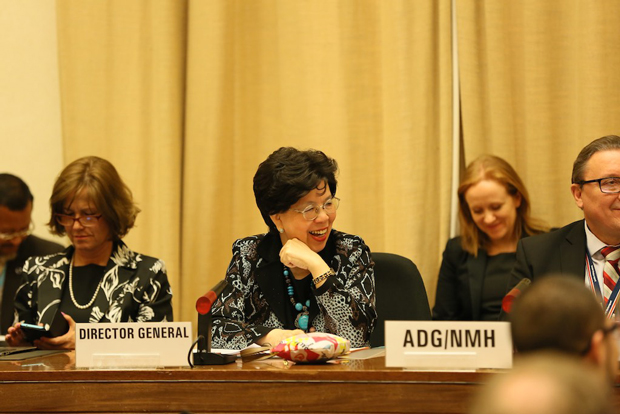 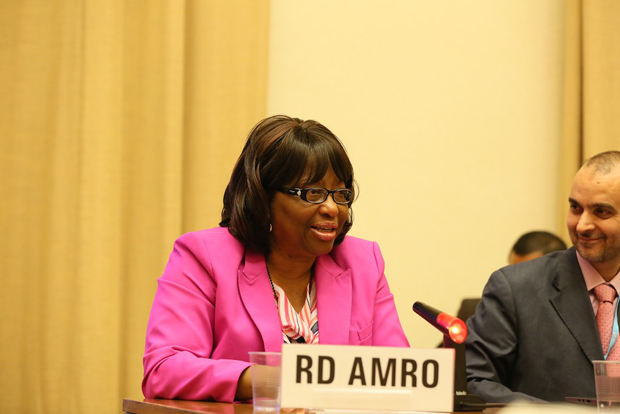 The director-general of the World Health Organization (WHO), Margaret Chan, pointed out that the Political Declaration approved by the United Nations General Assembly in 2011 has drawn more attention to noncommunicable diseases. She emphasized the need for greater efforts towards cancer prevention, and for measures such as the Framework Convention on Tobacco Control. She applauded the efforts of the International Agency for Research on Cancer (IARC) which has further enhanced cancer control programs by providing the evidence needed to improve policies. She called for the need to seek ways to curtail treatment costs, and pointed to the Americas as an example of where steps have been taken to reduce the cost of HPV vaccines and cancer drugs.

Almost three million people are diagnosed with cancer each year across the Americas, and almost 1.3 million die from this disease. As in other regions, breast and cervical cancer are the leading causes of death in women, while lung and prostate cancer are most common in men. Unlike other regions, stomach cancer is the most common in several countries, and the incidence of colorectal cancer is rising, explained Etienne.

The Region has, nonetheless, made progress in the prevention and screening of cervical cancer. Twenty countries have introduced the HPV vaccine into their national immunization programs, and the PAHO Revolving Fund supplies Member States with vaccines at affordable prices. Mortality from this cancer has fallen, particularly in Chile, Costa Rica, and Brazil, as a result of screening programs and other initiatives, the PAHO Director explained.

She also pointed out that breast cancer screening programs are being implemented in several countries, with PAHO support providing guidelines, training, and ensuring quality mammography. Many countries in the Region now include cancer services in their health packages, which reduces out-of-pocket expenditures and increases access to quality services. Mexico, Chile, and Brazil already have these programs which are helping to increase access to proper diagnosis and treatment, said Etienne. The PAHO Strategic Fund has also managed to procure lower prices for over 25 cancer or palliative care medicines.

Information and data are essential to understanding the burden of cancer in each country, and to be able to design appropriate programs, Etienne said. In this regard, PAHO will join forces with IARC in its Global Initiative for Cancer Registry Development with the aim of improving the quality of registries in the Region of the Americas. A registry training center for Latin America will be set up in Argentina, and another for the Caribbean in CARPHA. "With this partnership, we hope to develop the capacities needed to design more effective programs for the fight against cancer", she indicated.

The PAHO Director emphasized that PAHO will continue to support Member States with their public policies, strengthening their health services, surveillance, and efforts to reduce the burden of cancer.

Colombia's representative to the United Nations, Beatriz Londoño, discussed some of the main actions undertaken in Colombia including tobacco prevention and control, and vaccination for cervical cancer. She also mentioned that, following a recent IARC recommendation, the use of the herbicide glyphosate was now banned in the country.

— The Americas in the World Health Assembly
— PAHO/Cancer