Haiti: Activities for the Vaccination Week in the Americas 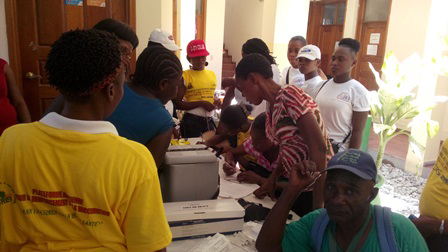 During the Vaccination Week in the Americas 2015, the Direction of the Expanded Program on Immunization in Haiti (DPEV) organized a conference on the 29th April 2015 with partners involved in this topic, and with the support of PAHO/WHO Haiti office. The main objective of this meeting was to strongly tighten links of the partnership between the Haitian Pediatric Society and DPEV. Strengthen this partnership to obtain a commitment of the pediatricians to contribute to efforts that must be deployed for increasing DPEV performances. Almost sixty people attended to the activity whose 40 pediatrician, various members of the Haitian platform for the strengthening of immunization (PHAREV), local and international partners as PAHO/WHO, UNICEF, The Centers for Disease Control and Prevention (CDC) or GHESKIO.

Additionally PHAREV organized various activities during the Week jointly with PAHO/WHO, Gavi Alliance, CDC, INSHAC (Haitian Institute of Community Health) and Catholic relief Services (CRS); in order to promote the importance of vaccination such as: marches for immunization awareness, tour sensitization with sound trucks in Port au Prince and several cities of Haiti with banners and others equipment displaying awareness messages about vaccination, sensitization activities to the local communities (market, churches etc.). They also produced an outreach radio spot which was broadcasted on almost the 10 main Haitian radio and various local ones. The PHAREV gave also interviews to Haitian medias (TV & radios) about the Vaccination week in America and the importance of vaccination in order to improve health of Haitian people.