Tackling the leading causes of death in the Americas: Launch of the Inter-American Task Force on Noncommunicable Diseases 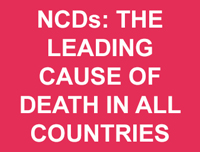 The Inter-American Task Force (IATF) on Noncommunicable Diseases (NCDs) was launched in Washington on 17 June 2017, in an event were the collaboration among the Inter-American organizations and associated international institutions and agencies, to support Member States in the prevention and control of NCDs and their related risk factors, was discussed.

Noncommunicable Diseases (NCDs) are diseases of long duration and generally are of slow progression. NCDs are principally: cardiovascular diseases (CVDs), cancers, diabetes, and chronic respiratory diseases, together with four shared behavioral risk factors: tobacco use, unhealthy diet, physical inactivity, and the harmful use of alcohol. NCDs account for about 80% of deaths in the Region of the Americas. Thirty six percent of these deaths occurred prematurely in persons aged less than 70 years of age.  Millions of people live with at least one NCD in the Americas, and many millions more are at risk of developing a disease because of their risk factors.

The human and economic impact is too large to ignore. Moreover, the causes and impacts of NCDs extend beyond the health sector, and require a multi-sectoral, multi-partner approach to achieve sustainable impact. If these current trends are to be reversed, it is critical that we place NCDs as the highest priority on the political agenda, along with intersectoral approaches to prevent, reduce and control the disease burden. Actions by government sectors other than the health sector are critical to tackle modifiable risk factors that are causal to the four principal NCDs, and to address the social determinants that particularly impact vulnerable populations, in order to create the conditions for healthier behaviors.

pdf NCDs in the Americas: Quick Facts and Figures

pdf NCDs in the Americas: All Sectors of society can help solve the problem