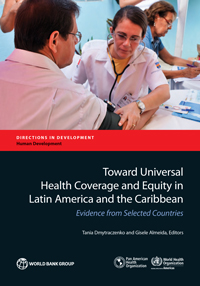 Washington, D.C., 22 June 2015 (PAHO/WHO- World Bank) — Since the early 2000s, Latin America and the Caribbean has seen meaningful progress toward universal health coverage with an additional 46 million people in nine countries having at least nominal guarantees of affordable health care, according to a new joint publication by the Pan American Health Organization/World Health Organization (PAHO/WHO) and the World Bank, released here today.

"The report shows that countries have made meaningful progress toward universal health coverage, with increases in population coverage and access to health services, a rise in public spending on health, and a decline in out-of-pocket payments," said Dr. Carissa Etienne, PAHO/WHO Director "Despite the advances, much remains to be done to close the equity gap and address new health challenges in the region."

The report, Toward Universal Health Coverage and Equity in Latin America and the Caribbean: Evidence from Selected Countries, shows that while countries have been expanding population coverage and access to health services, the poor remain underserved, and inadequate attention is paid to noncommunicable diseases (NCDs) that account for most deaths in the region. The study primarily focusses on 10 countries: Argentina, Brazil, Chile, Colombia, Costa Rica, Guatemala, Jamaica, Mexico, Peru and Uruguay.

"The region has increased its spending on health and narrowed the gap between rich and poor on a number of key outcomes: average life expectancy has risen significantly, more children live to see their first and fifth birthdays, and fewer mothers are dying from complications of childbirth," said Jorge Familiar, World Bank Vice President for Latin America and the Caribbean. "In a context of constrained resources and lower economic growth, countries now face the challenge of boosting the efficiency of their health systems to continue building on these achievements," he said.

The report, edited by Dr. Gisele Almeida, Advisor in Health Systems and Services Analysis at PAHO and Dr. Tania Dmytraczenko, Senior Economist at the World Bank, notes persistent health inequities between and within countries and the failure of some health systems to address changing health needs. While the rate of impoverishment owing to health care expenditures is declining, 2 to 4 million people in the nine countries analyzed were driven into poverty due to out-of-pocket health spending, with expenditures on medicines being the largest cost driver.

Latin American and Caribbean countries also face new health challenges. While many countries in the region have achieved impressive gains in the level and equity in access to maternal and child health services, the report stresses the urgency to extend those gains to NCDs, which are an increasing share in the burden of disease.

"The region's changing demographic and epidemiological profile, notably its aging population, has shifted the burden of disease toward chronic illness, which tends to affect all population groups, while increasing the cost of and demand for health services across the board," said Dr. Tim Evans, Senior Director of Health, Nutrition and Population at the World Bank Group.

The greatest challenge now facing countries, the report notes, is the need to increase public financing and efficiency to further expand health coverage and to cope with rapidly aging populations and the rising burden of NCDs. The report recommends that countries explore new, more effective and fairer financing measures, while also increasing the efficiency of health systems through strategic reforms that prioritize primary care.

Delivering on the commitment to universal health coverage will invariably require concerted efforts to improve revenue generation in a fiscally sustainable manner as well as to aim for more value for money.

In 2014, the Member States of the Pan American Health Organization unanimously adopted a regional Strategy for Universal Access to Health and Universal Health Coverage, which recognizes the right to health as its core value.

"National policies and strategies promoting universal access to health and universal health coverage should be firmly anchored in the premise that the enjoyment of the highest attainable standard of health is one of the fundamental rights of every human being," said Dr. James Fitzgerald, Director of Health Systems and Services at PAHO/WHO.

Dr. Etienne praised the World Bank for its embrace of universal health coverage as part of its mission to eliminate absolute poverty by 2030, calling investment in universal health "a powerful and underutilized tool for economic development."

The report also finds evidence that the best results have been seen in countries that increased public spending on health, covered their whole populations and integrated their health systems rather than maintaining separate systems for different segments of the population.

— Toward Universal Health Coverage and Equity in Latin America and the Caribbean: Evidence from Selected Countries