Washington, D.C., 1 September 2015 (PAHO/WHO) — Sales of industrially processed food products—including fast food and sugary beverages—have been rising steadily in Latin America and are fueling increased obesity rates throughout the region, according to a report published this week by the Pan American Health Organization/World Health Organization (PAHO/WHO). 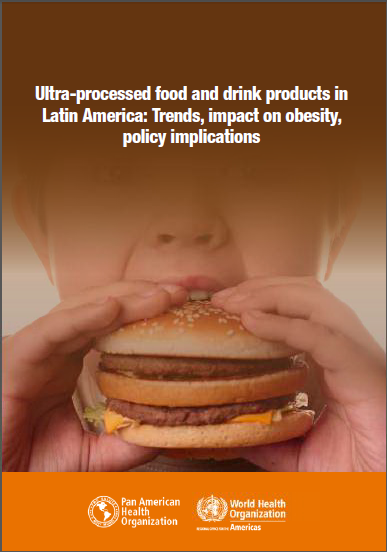 The new report, "Ultra-processed food and drink products in Latin America: Trends, impact on obesity, policy implications," shows that per capita sales of these products increased in Latin America from 2000 to 2013, even as such sales were declining in North America. The increased consumption was strongly correlated with body weight increases, indicating that these products are a major driver of growing rates of overweight and obesity in the region.

"Ultra-processed food products and fast food are occupying a larger and larger share of what people eat and drink in Latin America, with very negative results," said Enrique Jacoby, PAHO/WHO advisor on nutrition and physical activity. "These products are not designed to meet people's nutritional needs. They are engineered to have long shelf lives and to create cravings that can completely overpower people's innate appetite-control mechanisms and their rational desire to stop eating. So they are doubly harmful: they are quasi-addictive and thus increase overweight and obesity, while replacing whole fresh foods that are the foundation of a natural, nutrient-rich human diet."

Data also show that the increasing consumption of ultra-processed foods strongly correlated with increasing body weight in the 13 Latin American countries. In countries where sales of these products were higher—including Mexico and Chile—people had higher mean body mass. Where sales of these products were lower and traditional diets still prevailed—such as in Bolivia and Peru—mean body mass was lower. Both body mass and sales of ultra-processed products, however, were rapidly rising in all 13 countries studied.

According to the report, these trends stem from changes in the international food system brought about by globalization and market deregulation, which have increased the penetration of foreign and multinational food corporations into national markets. The report presents data from 74 countries worldwide that show a strong correlation between sales of ultra-processed food products and market deregulation, as indicated by the Index of Economic Freedom.

"Latin America and other developing regions have become attractive markets for industrial food processors, especially as high-income markets become saturated or even begin to reduce consumption of these products," said Jean-Claude Moubarac, a nutrition expert at the University of São Paulo who carried out the PAHO/WHO-commissioned study. "These markets are growing because of population growth, urbanization, and increasing incomes. But countries' trade, regulatory and fiscal policies are equally important. They determine the pricing, availability and affordability of foods. Along with marketing and changing lifestyles, these are the major determinants of what people choose to eat."

To slow the rise in consumption of ultra-processed foods and increasing rates of obesity and overweight in Latin America, the report recommends that governments, the scientific community, and civil society organizations support and implement policies to protect and promote healthy food choices. These include information and education campaigns but also regulations on pricing, incentives, agriculture and trade that protect and promote family farming, traditional crops, locally sourced fresh foods in school lunch programs, and domestic food preparation and cooking skills. These measures are in line with PAHO/WHO's 2014 Plan of Action for the Prevention of Obesity in Children and Adolescents, which also calls for strict limits on marketing of unhealthy food products to children.

"It's not too late to change these trends," said Jacoby. "Food cultures based on family meals and unprocessed or minimally processed foods are alive and well in Latin America, but they face a serious threat from aggressive marketing and changing lifestyles. We need educated consumers to create demand for better and healthier food systems, and we need governments to play an active role in creating such systems through regulations and incentives. These actions are critical to reverse the negative impact of globalization on diet and health."

— Countries pledge action to reduce child obesity in the Americas