Carissa F. Etienne addressed an event on Sustainable Development Goal (SDG) 2, "Zero Hunger," during the United Nations General Assembly in New York this week. The SDGs are a main focus of discussion at this year's UNGA.

New York, 25 September 2015 (PAHO/WHO) — Ensuring that "everyone has access to a diet that is nutritionally sound, culturally acceptable and affordable throughout the life course" is a major public health challenge, the director of the Pan American Health Organization/World Health Organization (PAHO/WHO) said during an event focused on Sustainable Development Goal (SDG) number 2, "Zero Hunger," held in parallel with the United Nations General Assembly in New York. 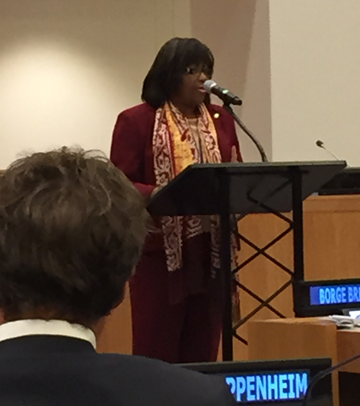 The public health sector cannot address the challenge alone, however, said Etienne. It "requires strong and coherent policies nationally, regionally and globally and across multiple sectors," including agriculture, food production, distribution, marketing, and the environment. What is needed is "dramatic change and urgent collective action to address nutrition targets and to align them with planetary health," she said.

The Sept. 25 event was jointly organized by the EAT Initiative, the Norwegian Ministry of Foreign Affairs, the Consortium of International Agricultural Research Centers (CGIAR) and the World Health Organization (WHO). It drew some 400 ministers and other delegates to discuss how to end hunger, ensure food security, improve nutrition, and promote sustainable agriculture.

"Poor nutrition leads to seemingly contradictory outcomes: obesity and overweight have reached epidemic levels worldwide, affecting both children and adults. At the same time, many countries continue to experience high rates of malnutrition and undernutrition, which stunts children's growth and cognitive development and carries negative consequences well into adulthood," said Etienne. This can be changed with healthy diets that can be achieved in environmentally sustainable ways through progressive agricultural policies.

Etienne noted that multisectoral collaboration is key to establishing policies that can halt and reverse the current negative trends in nutrition. She said the countries of the Americas "are leading the way in promoting dietary patterns that prevent both undernutrition and obesity, while also protecting the environment." Examples include new dietary guidelines in Brazil; new food-labeling requirements in Chile and Ecuador; new taxes on sugary foods in Barbados, Dominica and Mexico; and restrictions on marketing of unhealthy foods and beverages to children in Chile, Mexico, and Quebec, Canada.

Etienne noted that ministers of health from throughout the Americas last year approved a new five-year action plan to prevent obesity in children and adolescents, which provides lines of action to address these challenges.

"It takes a life-course approach," said Etienne. "For example, recognizing that breastfeeding of babies sets the stage for healthier dietary practices throughout life." She called on governments to "lead by example" by implementing the policies recommended last year at the Second International Conference of Nutrition (ICN2) in Rome. These policies will "set the course for a much healthier future for each and everyone one of us."

The new SDGs set out a new international development agenda for the next 15 years and are a central focus of this year's United Nations General Assembly.

— Plan of action for the prevention of obesity in children and adolescents (CD53.R13)