Washington, D.C., 28 September 2015 (PAHO/WHO) -- It was the 1960s. Modernist architecture was hot, Washington architecture was not, and the world's first international public health organization was coming into its own. 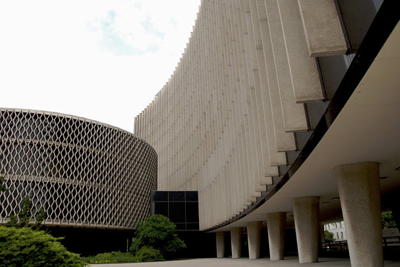 The result, 50 years ago this week, was the opening of the headquarters of the Pan American Health Organization (PAHO) in a building that shocked the denizens of D.C. at the time and that to this day remains an edgy, intriguing architectural statement in the midst of otherwise staid Foggy Bottom.

Designed by Uruguayan architect Román Fresnedo Siri, the PAHO building is a giant, squat cylinder elevated by ground-level supporting columns and backed by a gently curved 10-story tower that seems to cup it like a hand. Fresnedo Siri conceived it as homage to the Swiss-French architect Charles-Édouard Jeanneret-Gris, better known as Le Corbusier, considered one of the pioneers of what is now called modern architecture.

To this day, its elegant lines, its broad plaza lined with flagpoles, the supporting columns known as pilotis and the casing of its circular centerpiece in the complex sun-shading louvres known at brise soleil make the building one of the most distinctive in the city.

But beyond the idiosyncratic look of the building is a deeper story. In its ambition to construct such distinct headquarters, PAHO, founded in 1902 (before the World Health Organization of which it later became part), was signaling to the world its own singularity as an organization and its determination to make a difference in the lives of the people of the Americas.

"Health is akin to beauty," John Gardner, then secretary of health, education and welfare of the United States, said at the building's inauguration on September 27, 1965. "It is fitting that a building dedicated to the ideal of better health for the people of the Americas should express that beauty in its form and design."

In a ceremony today, 50 years after it opened its doors on Sept. 27, 1965, the building at 23rd Street, N.W., and Virginia Avenue and the humanitarian vision it still represents was honored once again.

On hand was Fresnedo Siri's nephew, Carlos Fresnedo, there to receive recognition for the achievement of the architect, who died in 1975. Joining him was Dr. Alix Cantave of the W.K. Kellogg Foundation, which lent PAHO money to build the headquarters, and acting U.S. Assistant Secretary for Health Karen DeSalvo representing the United States government, which gave PAHO land to build it on just half a block from the U.S. Department of State.

At the time of its move into the building Fresnedo Siri designed, PAHO was evolving from its beginnings as a small bureau founded to combat the spread of disease in the hemisphere to a maturing institution with a sweeping mission to improve all aspects of public health. Following World War II and the creation of the United Nations system, it was tapped to serve as the regional office of WHO. Meanwhile, after a half-century under the leadership of three U.S. surgeons general, PAHO began a process of Latin-Americanization that led to the election in 1957 of a Chilean, Dr. Abraham Horwitz, as director.

The 1960s brought John F. Kennedy's southward-looking Alliance for Progress, which turned to PAHO to oversee health projects complementing economic development initiatives in Latin America and the Caribbean. As its operations grew, its expanding staff in Washington strained the bounds of its offices.

But despite its growing importance, PAHO lacked the funds for a home of its own.

Enter the U.S., which donated the one-acre triangular plot of land for the PAHO building, and the Kellogg Foundation, which awarded PAHO a $5 million grant for its design and construction.

Even the structure of the grant from the Battle Creek, Michigan-based foundation was emblematic of PAHO's ambitions. It was made in the form of a no-interest loan, to be paid off in annual increments into a special fund established by the Kellogg Foundation to promote public health initiatives in the Americas.

"In other words, the repayment results in increased activity guided by [PAHO] in the accomplishment of its purposes," said Dr. Emory W. Morris, then president of the Kellogg Foundation, at the inauguration. "We feel...that there could be no better or more rewarding investment of those funds."

The investment paid off. These days PAHO employs more than 2,000 public health experts and support staff throughout the hemisphere and takes a leading role in the control and eradication of communicable diseases including malaria, yellow fever, measles and tuberculosis. Its technical cooperation with the ministries of health of dozens of nations has been instrumental in delivering health care, vaccinations, nutrition and preventive care to the estimated 991 million people in the Americas.

At the center of it all is the 170,000 square foot PAHO building. With its glass curtain wall shaded from the sun by the brise soleil and its 29 grand bronze medallions designed by U.S. sculptor Michael Lantz set in black stone representing PAHO's founding, the building was perhaps Fresnedo Siri's crowning achievement.

Its grand Council Chamber can accommodate 400 people within its circular walls and under its soaring, chandeliered ceiling. And so it will, beginning today, when PAHO convenes health ministers from throughout the Americas for five days of annual discussions on priority health issues and actions to address them at its 54th Directing Council.

Both the circular building that houses the Council Chamber and the curving "Secretariat Tower" behind it are furnished with marble, paintings, sculptures and other gifts from PAHO member governments throughout the Americas.

Fresnedo Siri's other civic structures, many likewise inspired by Le Corbusier, dot the Uruguayan capital of Montevideo. They include the Architecture School; El Palacio de la Luz, the headquarters of UTE, Uruguay's government-owned power company; the American Hospital; and a monument to Luis Batlle Berres, president of Uruguay in the mid 20th century.

But in Washington the PAHO headquarters stands alone.