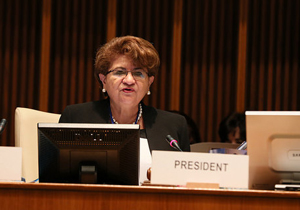 Washington, D.C., September 28, 2015 (PHO/WHO)- The Health Minister of El Salvador, Violeta Menjivar, was elected president today of the 54th Directing Council of the Pan American Health Organization, an annual gathering of senior health officials from across the Americas to set the public health policies and priorities for the region.

Throughout this weekthat begins today and ends Oct. 2, delegates from more than 40 countries and territories will adopt strategies and plans to strengthen their health systems to confront hepatitis, dementia, antimicrobial resistance and tuberculosis. They will also establish a roadmap to extend the benefits of vaccinations to all, dedicate their health systems to systematically preventing and treating violence against women and better the health of workers across the hemisphere.

Menjivar was elected by PAHO's Directing Council to preside over its deliberations this year, succeeding the Council's outgoing president, from Dominican Republic.

During the meetings, the region's health authorities will also evaluate progress achieved in making the region's roads safer, and in alleviating dengue and chronic kidney disease affecting farming communities in Central America, among others. They will also hear a report on the status of the chikungunya virus in the region. The virus is transmitted by mosquitoes and causes the sudden onset of fever and severe joint pain.

The PAHO Directing Council is made up of the ministers of health and high level delegates of PAHO/WHO member countries and meets each year in Washington, D.C., to set health policies and establish priorities for PAHO's technical cooperation programs and public health collaboration.

PAHO works with the countries of the Americas to better the health and quality of life of the people of the region. Founded in 1902, it is world's oldest international public health agency. It serves at the Regional Office for the Americas of the World Health Organization (WHO) and is the specialized health agency of the Inter-American system.