Washington, D.C., 29 September 2015 — A coalition of organizations that are supporting countries of the Americas in fighting onchocerciasis (also known as river blindness) today called for a final push to definitively eliminate transmission of the disabling disease from the region.

Members of the coalition—The Carter Center, the Pan American Health Organization/World Health Organization (PAHO/WHO), and the Mectizan Donation Program of Merck & Co., Inc. (known as MSD outside the United States and Canada)—gathered to recognize the efforts Colombia, Ecuador and Mexico, which have obtained verification of their elimination of the disease; Guatemala, which has requested verification for 2016; and Brazil and Venezuela, which continue to work toward eliminating river blindness.

"Today, four of the six river blindness-endemic countries in the Americas have eliminated transmission of the disease, but I am not ready to celebrate until the task is complete," said former U.S. President Jimmy Carter, founder of The Carter Center, which has led the campaign to wipe out river blindness in Latin America through its Onchocerciasis Elimination Program for the Americas (OEPA). "Now is not the time to be complacent. It is the time to increase our efforts."

Onchocerciasis is a parasitic disease carried by biting black flies that breed in fast-flowing rivers and streams. It can cause intense itching and skin damage, nodules, eye damage, and eventually blindness. The disease disproportionately affects low-income communities in several Latin American countries and in Africa, contributing to the cycle of poverty by reducing affected individuals' ability to work and learn. In the late 1990s, an estimated 500,000 people in six endemic countries of the Americas were at risk of onchocerciasis.

"River blindness can be controlled and even eliminated when countries mobilize the necessary political will and receive strong support from international partners," said Dr. Carissa F. Etienne, director of the Pan American Health Organization, Regional Office for the Americas of the World Health Organization (PAHO/WHO). "Today we are calling for renewed resolve in our joint efforts so we can finally rid our hemisphere of this disabling disease forever."

WHO Director General Margaret Chan noted that diseases such as onchocerciasis, also known as neglected diseases, contribute to the cycle of poverty and that partnerships between governments and organizations such as those in OEPA can help eliminate these diseases.

"We know that these things that affect countries do not respect borders," said Chan. "So I want you to pay attention to make sure your excellent work is not lost with the reintroduction of these diseases." She encouraged Brazil and Venezuela to keep working together to eliminate the remaining two foci of this disease, along their shared border.

For more than two decades, elimination efforts undertaken by the endemic countries and coordinated by the Carter Center's Onchocerciasis Elimination Program for the Americas (OEPA) have reduced the number of people at risk of onchocerciasis to just over 25,000. In 2013 and 2014, respectively, Colombia and Ecuador were officially verified as having eliminated the disease.

Most recently, in July, Mexico became the third country to receive verification by WHO of its elimination of onchocerciasis. In addition, Guatemala has submitted a request for verification, with a country visit anticipated for early 2016. This leaves only one area with active transmission: the shared border region between Brazil and the Bolivarian Republic of Venezuela that is home to the Yanomami indigenous people.

The linchpin of the elimination strategy—which is also being used in Africa—is the mass administration of the antiparasitic drug Mectizan® (ivermectin), which is produced and provided by Merck free of charge through its Mectizan® Donation Program. Since its beginning in 1987, the donation program has worked to ensure twice-yearly mass treatment of affected communities and by 2006, that goal had been achieved in all 13 endemic areas in the Americas.

"We are humbled by the great work of the alliance of partners and countries to protect future generations from this disease that carries such devastating implications for people, families and communities," said Dr. Julie L. Gerberding, executive vice president, Strategic Communications, Global Public Policy and Population Health at Merck & Co., Inc. "Through the Mectizan® Donation Program, our company has committed to donating this medicine for as long as it's needed, and we look forward to celebrating the day when river blindness has been eliminated worldwide."

The core partners who have supported the ministries of health of the affect countries include the Carter Center's OEPA, PAHO/WHO, the U.S. Centers for Disease Control and Prevention (CDC), Merck & Co. Inc.'s Mectizan Donation Program, and a host of international partners, foundations, universities, and individuals.

The final push to eliminate onchocerciasis from the Brazil-Venezuela border area represents a major challenge because of the dispersed and migratory nature of the Yanomami population, who live in small communities in the dense, nearly inaccessible terrain of the deep Amazon rainforest and mountains. The ministries of health of Brazil and Venezuela are working with The Carter Center/OEPA, PAHO/WHO, and other partners to ensure the necessary treatment is delivered to the Yanomami people to meet the goal of eliminating onchocerciasis from the area—and therefore from the Americas as a whole—by 2020. 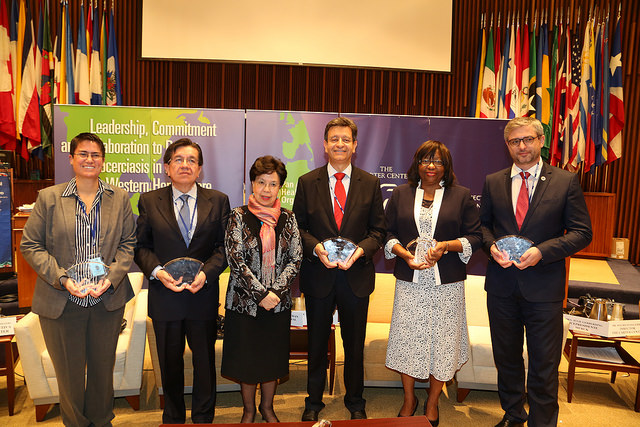