As most of the 2,000+ delegates gathered for the start of the 2nd Global High-Level Conference on Road Safety in Brasilia last week, Director-General Margaret Chan of the World Health Organization (WHO), Dr. Carissa F. Etienne, Director of the Pan American Health Organization (PAHO), and Dr. Joaquín Molina, PAHO/WHO's country representative in Brazil, were meeting with President Dilma Rousseff of Brazil to discuss topics impacting many countries in the Americas.

Rousseff thanked PAHO/WHO for their support in organizing the conference and praised Chan and Etienne for PAHO's ongoing commitment to the Mais Médicos program, mentioning that it was essential to the success of that initiative. Chan and Etienne underscored the mutual benefits of the partnership, noting that Brazil's overarching success with health programs offers many helpful lessons to WHO and its Member States around the world. 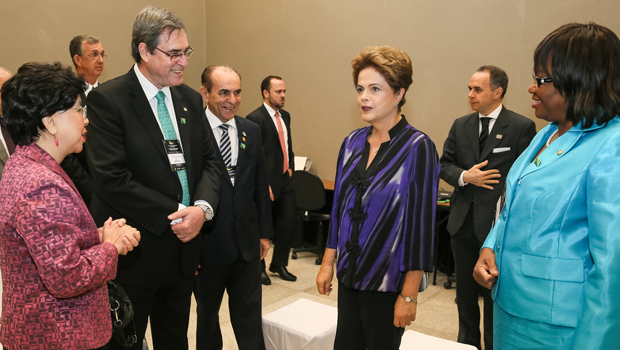 Rousseff and Brazilian Minister of Health Marcelo Castro spoke with Chan, Etienne and Molina about the incidence of Zika, chikungunya and dengue. Brazil's dignitaries also mentioned the work that had been done to identify a cause for the increase in cases of microcephaly across the country, particularly in the northwestern region. Chan declared that Brazil is taking all the necessary steps and indicated that PAHO/WHO would continue to work very closely with the Brazilian government on this matter. Chan, Etienne and Molina reassured Rousseff that the Global Outbreak Alert and Response Network (GOARN) would also be available to Brazil.

Universal health coverage was also touched upon during the encounter. Chan praised the achievements of the country's Sistema Único de Saúde (Unified Health System), highlighting it as an international model for many member countries that are developing health strategies and policies. She and Etienne encouraged Brazil to keep up the good work on road safety and highlighted the importance of increasing measures to reduce deaths and injuries.

Castro mentioned the initiatives taken to improve road safety in Brazil, including efforts to restrict drinking and driving and to step up enforcement of car seat use for infants and toddlers. Brazil's health minister also invited Etienne and Chan to participate in the upcoming "Nutrition for Growth: Beating Hunger through Business and Science" summit, to be hosted by Brazil next August in Rio de Janeiro. The event follows the UK-Brazil "Nutrition for Growth" summit that was held in London last June, which highlighted the devastating consequences of undernutrition in children and mobilized more than US$4 billion in investments for nutrition.