PAHO/WHO report shows new HIV infections in children have fallen by half since 2010. Still, some 2,500 infants in the Region contracted the virus from their mothers last year.

Washington, D.C., 30 November 2015 (PAHO/WHO) — Seventeen countries and territories in the Americas have supplied data indicating that they may have eliminated mother-to-child transmission of HIV and syphilis, according to a new report by the Pan American Health Organization/World Health Organization (PAHO/WHO), unveiled on the eve of World AIDS Day (1 December). Nevertheless, an estimated 2,500 children in the Region were born with the virus in 2014. 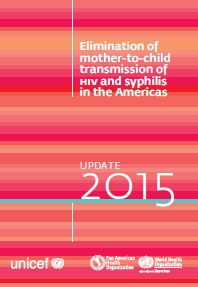 According to the report Elimination of Mother-to-Child Transmission of HIV and Syphilis in the Americas, Update 2015, the 17 countries and territories reporting data consistent with dual elimination account for 34% of all births in the Region. They are: Anguilla, Antigua and Barbuda, Barbados, Bermuda, Canada, Cayman Islands, Chile, Cuba, Dominica, Montserrat, Puerto Rico, Saba, Saint Kitts and Nevis, Turks and Caicos Islands, United States, Virgin Islands (United Kingdom), and Virgin Islands (USA).

"The countries of the Americas have made tremendous efforts to reduce mother-to-child transmission of HIV, cutting new infections by half since 2010," noted Dr. Carissa F. Etienne, Director of PAHO/WHO, adding, "We can do more to protect mothers and children to achieve a generation free of AIDS."

In 2014, 96% of pregnant women in Latin America and the Caribbean had at least one prenatal check-up, 75% were tested for HIV, and 81% of those needing treatment received it. These figures have increased by 2%, 21%, and 45%, respectively, since 2010, when PAHO/WHO and UNICEF implemented the Regional Initiative for the Elimination of Mother-to-Child Transmission of HIV and Congenital Syphilis in Latin America and the Caribbean to support countries with the elimination of these diseases.

If left untreated, women living with HIV have a 15—45% chance of transmitting the virus to their babies during pregnancy, childbirth, or breastfeeding. If they receive treatment and have access to the recommended series of interventions during the stages in which the infection can occur, that risk falls to less than 2%.

With regard to syphilis, screening of pregnant women in Latin America and the Caribbean has remained stable at around 80% since 2010, while the percentage of women treated ranged from 50% to 100% in the countries that supplied data. In 2014, 17,400 cases of congenital syphilis were reported in the 32 countries of the Americas that provided data to PAHO/WHO.

This year, Cuba became the first country in the world to receive official WHO validation that it has eliminated mother-to-child transmission of HIV and syphilis. An additional 16 countries are in a position to request validation.

Toward the end of the epidemic

An estimated 2 million people in Latin America and the Caribbean are living with HIV, and there were approximately 100,000 new HIV infections in the Region in 2014. The vast majority of these infections were in adults and youths, mainly gay men and other men who have sex with men, transgender women, and sex workers and their clients.

To put an end to AIDS as a public health problem by 2030, the countries of the Region, civil society, international cooperation, and people living with and affected by HIV set new ambitious goals last year. The "90-90-90" HIV treatment target calls for ensuring that by 2020, 90% of people living with HIV know their HIV status, 90% of all people with diagnosed HIV receive sustained antiviral therapy, and 90% of all people receiving antiretroviral therapy have undetectable viral load.

An estimated 30% of people with HIV in Latin America and the Caribbean do not know they have the virus, and many are diagnosed when the disease is already in an advanced stage. Furthermore, 46% of all people with HIV are in treatment and 83% of them have reached viral suppression.

"If we want to end HIV by 2030, we need to accelerate action for prevention and access to treatment, focusing on key populations and increasing investment and resources," said Dr. Marcos Espinal, Director of PAHO/ WHO's Department of Communicable Diseases and Health Analysis. "We need to expand access to care without discrimination, as well as to a package of prevention measures for reducing new infections, ensuring timely detection of cases, and treating everyone."

PAHO/WHO is supporting its Member States in identifying and overcoming obstacles to controlling HIV, from diagnosis to viral suppression. "Guaranteeing success at each of these stages will be key to ending the HIV epidemic," said Espinal.

The report Elimination of Mother-to-Child Transmission of HIV and Syphilis in the Americas 2015 presents data from 52 countries and territories in the Americas. The information contained in the report was provided to PAHO/WHO by governments. This information is sent annually to measure the delivery of services and the impact on mother-to-child transmission of HIV and syphilis.

PAHO/WHO considers a country to have eliminated mother-to-child transmission of the two diseases when it undergoes a validation process that examines whether these goals have actually been met. In view of the annual fluctuations that can occur in the data, PAHO recommends at least two years of continuity in meeting the goals before a country initiates the validation process.

As of the end of November 2015, Cuba has been the only country to be validated by WHO.

— Report: Elimination of Mother-to-Child Transmission of HIV and Syphilis in the Americas 2015