Universal Health in the Americas can only be achieved if countries reduce the barriers to access and increase investment in primary care. Today, during the celebration of this year’s Universal Health Day, PAHO called on countries to implement these measures to ensure that all people have access to the health services they need.
READ MORE...

Projects to identify infants exposed to Zika virus in Colombia, to improve maternal health in rural communities of the Peruvian Amazon, and to increase nutrition in rural Colombian communities were among the winners of 2019 Social Innovation in Health Initiative awards announced by the Pan American Health Organization.
READ MORE...

The Pan American Health Organization’s new 2020-2025 strategic plan, which sets out action to reduce the main causes of death and illness in the Americas while addressing persisting inequities in health, was outlined today in a health ministers meeting, the 57th PAHO Directing Council.
READ MORE...

Health ministers to gather in Washington to set policies, priorities for health action in the Americas

Health ministers and other high-level delegates from the Americas will open a week-long meeting here on Sept. 30 to discuss health priorities and plans of action at the Pan American Health Organization’s 57th Directing Council .
READ MORE...

The Pan American Health Organization (PAHO) warns of the complex situation of dengue in Latin America and the Caribbean, a Region that is currently experiencing a new epidemic cycle of the disease after two years of low incidence.
READ MORE...

Twelve Latin American countries already monitor children who are born with congenital birth defects in order to better understand why and how often they occur, and how the survival and quality of life of these children can be improved.
READ MORE...

The Pan American Health Organization (PAHO) has called for countries in the Region of the Americas to prepare for a timely response to possible outbreaks of dengue. The disease is endemic in the Region and, since its reintroduction in the 1980s, has caused cyclical outbreaks and epidemics every three to five years.
READ MORE...

The radio interview goes much like any other—“What should pregnant women do to avoid Zika,” asks the interviewer—“They should use mosquito repellent, mesh on their doors and windows, and nets in their bedrooms,” answers the interviewee. The only difference is that the protagonists are not a journalist and a health professional, but two elementary school students from El Recreo in Durán, Ecuador.
READ MORE...

Ten threats to global health in 2019

The world is facing multiple health challenges. These range from outbreaks of vaccine-preventable diseases like measles and diphtheria, increasing reports of drug-resistant pathogens, growing rates of obesity and physical inactivity to the  health impacts of environmental pollution and climate change and multiple humanitarian crises.
READ MORE... 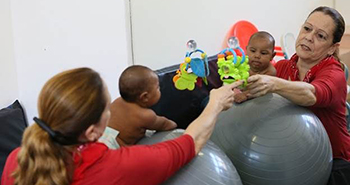 As part of the response to the Public Health Emergency of International Concern declared for Zika virus and its complications, The World Health Organization (WHO) published a Zika virus country classification scheme. The classification scheme was initially introduced in the ‘WHO interim guidance on surveillance for Zika Virus infection, microcephaly and Guillain-Barré syndrome (published on 7 April 2016) and then expanded in the ‘Zika virus country classification scheme’ (published on 10 March 2017). The country classification system was established in an effort to describe Zika virus circulation and transmission through the reporting of cases in a given place and time, facilitate Zika infection risk assessment, and guide public health recommendations. Currently, significant knowledge gaps remain around Zika virus transmission dynamics—it becomes increasingly challenging to assess if transmission of the virus has been interrupted in a population given the high proportion of asymptomatic persons among those infected with Zika virus, lack of specificity of the clinical presentation, the complexity of laboratory diagnosis in a context of flavivirus co-circulation, and high movement of persons across and within countries.

With this in mind, the country classification system no longer met the needs of surveillance in the post-epidemic period and has hence been discontinued as of October 17, 2018 as reflected on the WHO webpage.  The WHO Zika country classification system will be replaced by frequent epidemiological updates. PAHO/WHO will continue to work with national health authorities in enhancing health systems’ capacity to detect and respond to the threat posed by Zika and other arboviruses. Relates sites - PAHO website: Zika
READ MORE...