Montevideo, 3 February 2016 (PAHO/WHO) — More resources are urgently needed to fight the spread of Zika in the Americas and the apparently related increase in microcephaly and other complications, the Director of the Pan American Health Organization/World Health Organization (PAHO/WHO) told ministers of health today in a meeting convened by the Southern Common Market (MERCOSUR), in Montevideo, Uruguay.

All countries in the Americas need to allocate new resources to step up mosquito control efforts, prepare their health services for an increase in demand, carry out public education campaigns and track the spread of Zika and increases in suspected complications of the virus, including microcephaly and Guillain-Barré syndrome. "This work will require tangible and explicit support from the highest political levels," Etienne told ministers of health at the meeting. 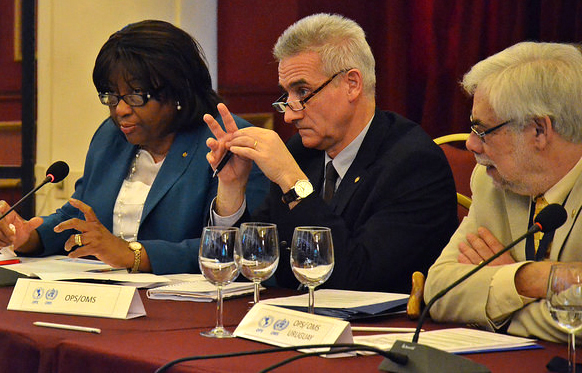 Later, in remarks to reporters, Etienne announced a new PAHO strategy to help countries mitigate the impact of Zika by strengthening their abilities to detect the introduction and spread of the virus, reduce mosquito populations, ensure the necessary healthcare services, and effectively communicate with the public on risks and prevention measures. To implement this strategy, PAHO is seeking an initial $8.5 million from the international community to support country efforts.

The special meeting of Latin American ministers of health came just two days after WHO's declaration of a Public Health Emergency of International Concern due to clusters of microcephaly in areas with Zika circulation. To date, Brazil has reported more than 3,000 suspected cases of microcephaly, which are currently under investigation.

Etienne said gaps in knowledge about Zika should not delay action to fight the virus.

"One fact of which we are unequivocally sure is that the Zika virus—like dengue, chikungunya and yellow fever viruses—is transmitted by the Aedes aegypti mosquito," said Etienne. "The most effective control measures are the prevention of mosquito bites and the reduction of mosquito populations." This points to action by governments, but in addition, "communities, families and individuals must be effectively mobilized to undertake the very critical work of eliminating mosquito breeding sites, including derelict vehicles, discarded tires, uncovered water barrels and other containers."

Etienne appealed for special attention to the needs of women of child-bearing age, and particularly women in low-income communities, who often lack access to the information and health services they need to protect themselves.

"The reality is that large numbers of women in our region lack access to sex education and effective methods of contraception," said Etienne. "It is highly probable that these same women may live under conditions of vulnerability, in neighborhoods where, for example, housing and environmental conditions provide an ideal breeding ground for mosquitoes, consequently increasing their potential exposure to mosquito bites. We must, therefore, make every effort to invest resources in comprehensive reproductive health services."

Following the meeting, the ministers of health of MERCOSUR and the Community of Latin American and Caribbean States (CELAC) issued a joint declaration pledging to improve their countries' mosquito-control strategies by drawing on recent experience and by simultaneously targeting not only Zika but other mosquito-borne viruses, especially dengue and chikungunya.

Ministers called on PAHO/WHO to support their efforts with direct technical cooperation, promote south-south cooperation and develop protocols and guidelines on surveillance, risk communication and clinical management, through a technical team in the region.

To date, 26 countries and territories of the Americas have reported local transmission of Zika virus infection. The hemisphere's first local cases appeared on Chile's Easter Island in February 2014, and in May 2015, Brazil reported the first locally transmitted cases on the American continent.

PAHO/WHO has been collaborating with Brazilian health authorities, mobilizing its own staff and external experts through the Global Outbreak Alert and Response Network (GOARN) and has carried out technical missions to other member countries. PAHO has been providing countries with guidance on surveillance and clinical management of Zika cases, laboratory detection of the virus, vector control, surveillance of microcephaly and other neurological syndromes, and risk communication.

In early March 2016, PAHO/WHO will host a meeting of research partners, including the U.S. Centers for Disease Control and Prevention (CDC), the Pasteur Institute and the Oswald Cruz Foundation (Fiocruz), among others, to develop a research agenda to address the gaps in knowledge and evidence about Zika and its health effects.

— Countries and territories with Zika autochthonous transmission in the Americas