The Emergency Committee agreed that a causal relationship between Zika infection during pregnancy and microcephaly is strongly suspected, though not yet scientifically proven. All experts agreed on the urgent need to coordinate international efforts to investigate and understand this relationship better.

Between January 2014 and 5 February 2016, a total of 33 countries have reported autochthonous circulation of Zika virus. There is also indirect evidence of local transmission in 6 additional countries.

The geographical distribution of Zika virus has been steadily increasing since it was first detected in the Americas in 2015. Further spread to countries within the geographical range of competent disease vectors — Aedes mosquitoes — is considered likely.

Seven countries have reported an increase in the incidence of cases of microcephaly and/or Guillain-Barré syndrome concomitantly with a Zika virus outbreak.

The global prevention and control strategy launched by WHO is based on surveillance, response activities, and research.

Countries and territories with autochthonous of Zika virus circulation 2007-2016 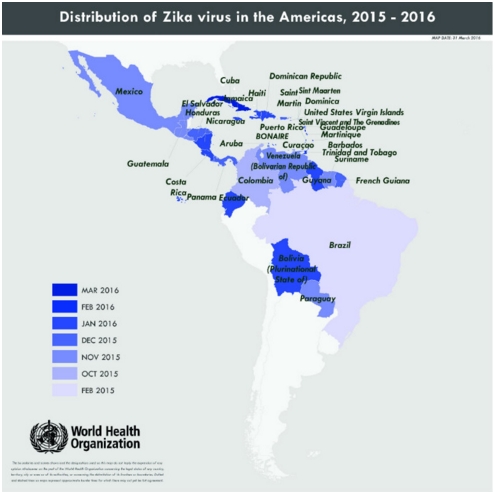