Scientists call for intensified research on Zika and microcephaly

Washington, DC, March 3, 2016 (PAHO/WHO) -- Research efforts must be ramped up to explore the unknown factors in microcephaly and congenital malformations that may be linked to infection with the Zika virus, international researchers concluded, after a two-day meeting at the Pan American Health Organization/World Health Organization (PAHO/WHO).

"The bottom line is that there is yet much to learn about Zika. We have made some progress but we still need to learn much more about this virus," said Marcos Espinal, director of PAHO/WHO's Department of Communicable Diseases. "Laboratory detection, epidemiology, the dynamics of arboviral diseases, mapping new vector control tools, these are among our priority research topics today," he added. 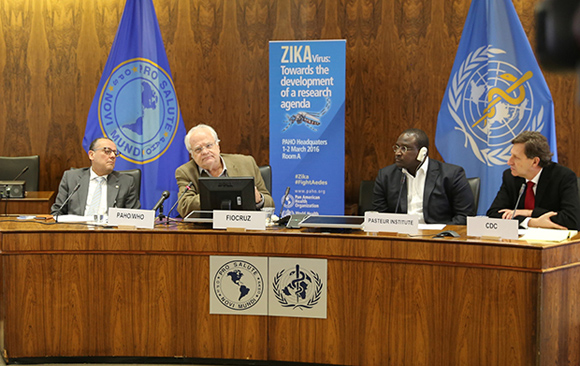 He said research partners at the meeting, including the U.S. Centers for Disease Control and Prevention (CDC), the Pasteur Institute and the Oswald Cruz Foundation (Fiocruz), are working with PAHO/WHO to address the gaps in knowledge and evidence about Zika and its health effects.

Dr. Paulo Buss of the Oswaldo Cruz Foundation said "Brazil is at the heart of this epidemic, and our surveillance system let us identify this epidemic rapidly and communicate it to PAHO, and link it with microcephaly." He said international solidarity is important, and universities and funding agencies should unite to coordinate and provide resources for research on Zika.

Dr. Amadou Sall of the Pasteur Institute said "It is critically important to share experiences and information on Zika to develop new tools." A task force has been set up to look at Zika and links to Guillain-Barre Syndrome, but there are many challenges in serology, testing, cross-reactions, and related areas, he said.

Dr. Lyle Petersen of the CDC said, "This is unique. We haven't seen anything like this before." Zika is the first vector-borne virus that appears to cause infection in fetuses, the first reliably spread by sexual transmission, and now is a widespread epidemic, he noted. "We must move extremely quickly. We have thousands of infections every single day in the Americas and we must be prepared." He said mosquito control programs have deteriorated and must be improved, and measures for community mosquito control must target pregnant women to help prevent them getting bitten by mosquitos. 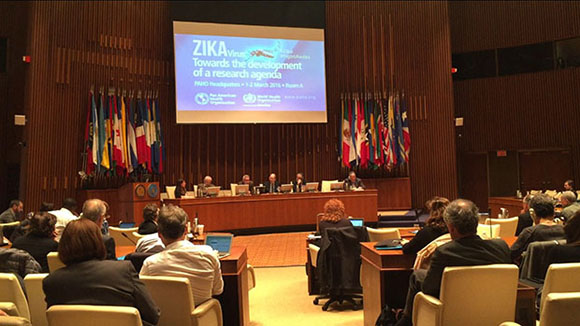 Autochthonous Zika virus transmission has been reported in 31 countries and territories of the Americas, notes Dr. Sylvain Aldighieri, PAHO's Epidemic Alert and Response chief, who is serving as incident manager for the Zika response. So far, increases in microcephaly cases and other neonatal malformations have only been reported in Brazil and French Polynesia, although two cases linked to a stay in Brazil were detected in two other countries. Eight countries and territories (including French Polynesia) have reported an increased incidence of Guillain-Barré syndrome (GBS) and/or laboratory confirmation of a Zika virus infection among GBS cases. The meeting was valuable, Aldighieri said, because it helped to build collaboration and networking among the institutions advancing research on various aspects of Zika.

"Our most important tool to combat Zika—and at the same time, dengue and chikungunya—is control of the Aedes aegypti mosquitoes that transmit these diseases. Since these mosquitoes live in and around houses, this will take a concerted effort with intensified community engagement to reduce the number of mosquitoes in the Americas. We are also looking urgently at improving control methods including insecticides and other technologies," Dr. Espinal said.

— Link to watch the media briefing