Washington, DC, April 5, 2016 (PAHO/WHO) — Mario Kreutzberger, the Hispanic TV variety show host better known as "Don Francisco," has joined the Pan American Health Organization (PAHO) to raise awareness of the importance of prevention and control of diabetes, a disease that now affects three times as many people in the Americas than in 1980 and is the fourth-leading cause of death in the hemisphere. 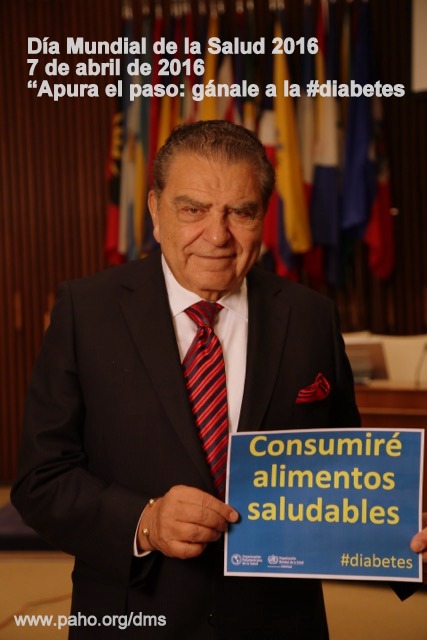 In a 45-second public service announcement (PSA), Don Francisco offers advice on avoiding overweight, obesity and sedentarism, the three top risk factors for developing the most common form of diabetes, type 2. For people who already have the disease, these same risk factors along with poor control of the condition increase the chances of complications and premature death.

"For 35 years I did very little sports and I ate a lot, but after that I started doing exercise every day," recalls the 75-year-old, who was diagnosed with diabetes at age 60. He adds that lifestyle changes can prevent or delay the onset of the disease.

The new PSA was produced by PAHO as part of the 2016 World Health Day campaign, which focuses on the growing problem of diabetes in the Americas and worldwide. In the video, Don Francisco advises viewers to "eat healthy foods and maintain a healthy body weight, exercise, eat less sugar, and if you are prescribed medicines, always take them."

Don Francisco will also participate in an international conference on April 7 in Mexico City, organized by PAHO and Mexico's Ministry of Health to celebrate World Health Day. The event (9—10:30 a.m. Mexico City time) can be followed online at www.livestream.com/paho.

Don Francisco has also collaborated with PAHO in public outreach campaigns on subjects including vaccination, blood donation, and healthy aging. In recognition of his contributions to public health, PAHO named him a Champion of Health of the Americas in 2005.

"Don Francisco is an example of the personal effort it takes to beat diabetes, so his participation in this campaign is key to show people throughout our region that diabetes can be prevented and controlled," said Alberto Barceló, PAHO's top diabetes expert. He added that governments also have an important role to play through public policies that help make the healthy choice the easy choice for people to make.

— 'Don Francisco's' interview on his relationship with diabetes