Diabetes is the 4th leading cause of death in the Americas and the principal cause of death in Mexico. World Health Day 2016 highlights the urgent need to step up prevention and control to reverse the growing epidemic

Mexico City, 7 April 2016 (PAHO/WHO) — Mexico has set an example for other countries by becoming the first country in the Americas to increase taxes on soft drinks and other sugary beverages to reduce consumption, said Carissa F. Etienne, Director of the Pan American Health Organization (PAHO), at an event marking World Health Day, which focuses on diabetes.

Measures such as increased taxes on sugar-sweetened drinks, regulations on advertising unhealthy foods to children, and food labeling to warn of excess salt, sugar or fat are among measures recommended by this year's World Health Day campaign to promote healthy diets for diabetes prevention.

"Mexico has shown global leadership by increasing taxes on sugar-sweetened beverages, which managed to reduce soda consumption by 6% in just one year. This is one component of a comprehensive national strategy adopted by Mexico to fight obesity, overweight and diabetes," said Etienne. "It is a great start, and other countries of our region, including Barbados and my country, Dominica, have replicated this intervention. As such, I invite the rest of the countries of our region to establish taxes on sugary beverages following Mexico's successful example." 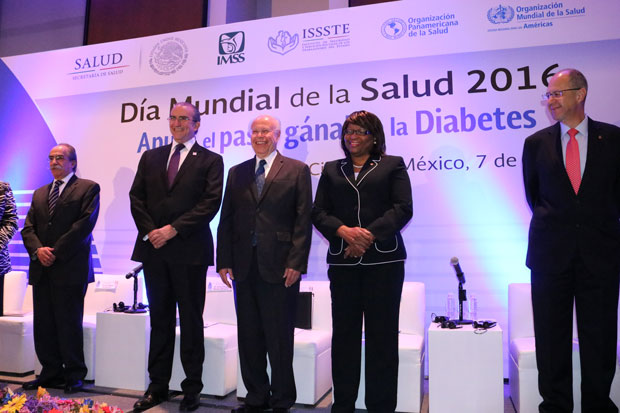 In the Americas, the number of people with diabetes has tripled over the past three decades, from 18 million in 1980 to some 62 million, about 8% of the population, by 2014. This increase has paralleled rising rates of overweight and obesity, a leading risk factor for type 2 diabetes in the region. If current trends continue, PAHO estimates that the number of persons with diabetes in the Americas will exceed 100 million by 2040.

"Diabetes affects people from all walks of life but especially people in vulnerable situations: those with economic limitations, without access to health care, and with fewer opportunities for healthy living," said Etienne. "We are, without a doubt, facing an epidemic that has devastating effects on the quality of life of those affected as well as on their families, health systems and countries' economies."

The PAHO Director's remarks came at the opening of a two-day meeting of international experts on diabetes organized by PAHO and Mexico's Ministry of Health. Secretary of Health José Narro was also on hand to help launch the World Health Day campaign in the Americas.

Narro pointed out that more than 90,000 Mexicans died of diabetes in 2015, accounting for one out of every seven deaths. "This subject is a top priority for us and deserves a comprehensive strategy," he said.

Etienne congratulated Narro and the Government of Mexico for showing their commitment to "policies and actions that facilitate healthy lifestyles."

In 2013, when Mexico established its new 10% tax on sugar-sweetened beverages, the country was one of the world's leading consumers of soft drinks and had the highest adult obesity rates in the Americas. Overweight and obesity are top risk factors for diabetes (as well as other chronic diseases), and a PAHO report on Mexico's soda tax notes that increased consumption of sugar-sweetened beverages is related to rising prevalence of insulin resistance, which causes type 2 diabetes and other illnesses.

In addition to its soda tax, Mexico has also committed to implementing policies based on the new World Health Organization (WHO) recommendations to limit daily consumption of added sugars.

Along with measures like these, Etienne urged PAHO member countries in the Americas to step up the fight against diabetes in other ways.

"Diabetes prevention and control also requires an equity approach to close the gaps and address social determinants of health," she said. "In this regard, PAHO is working closely with its Member States to move towards universal coverage and universal access to health and is promoting a model of integrated management of diabetes in primary care."

Also participating in the World Health Day launch was the Spanish-language TV host Mario Kreutzberger, better known as 'Don Francisco,' who is also a PAHO Champion of Health of the Americas. He shared his experience living with diabetes, with which he was diagnosed 15 years ago, and provided advice on prevention and management of the disease.

"I am one of 422 million people around the world now living with diabetes," said Kreutzberger. "As a communicator I have the responsibility of informing and raising awareness about diabetes, and for that reason I am joining PAHO's World Health Day campaign."

World Health Day is observed each April 7 to mark the anniversary of the founding of WHO in 1948. For more information see: http://www.paho.org/whd

— Taxes on Sugar-sweetened Beverages as a Public Health Strategy: The Experience of Mexico