Washington, DC, June 21, 2016 (PAHO / WHO) - The Executive Committee of the Pan American Health Organization (PAHO) is discussing strategies and plans to improve the health of the Americas at its 158th session, which runs through June 24.

The Committee, chaired by the Minister of Public Health of Ecuador, Margarita Guevara, includes representatives from nine Member States and guides the topics in technical cooperation that are debated by PAHO's Directing Council in September.

The issues being addressed by the Executive Committee include a strategy for the prevention and control of arboviral diseases (including Zika); action plans for the prevention and control of HIV and sexually transmitted infections; the elimination of neglected tropical diseases; and disaster risk reduction. They also cover topics such as health systems resilience; access and rational use of high-cost medicines and other strategic health technologies; and the health of migrants. Delegates are also reviewing a report on the response in the region of the Americas to the Zika virus.

The Director of the Pan American Health Organization, Carissa F. Etienne, noted that the region has recently faced major public health challenges including floods and earthquakes. "Even as we grappled with and responded to these natural disasters, we in the Americas were confronted by the crushing impact of the newly emerging Zika virus epidemic, which once again tested our preparedness and responsiveness to an outbreak emergency," she said. 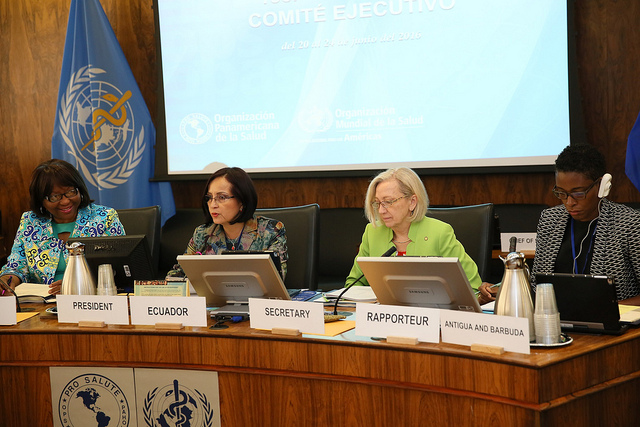 PAHO "mounted timely and effective responses to all these disasters and the outbreak, building upon its vast experience in disaster management. We were able to work with partners to ensure strong support to our affected Member States," she added, noting the importance of "an integrated approach to the prevention of Zika, dengue, chikungunya and yellow fever" in the new regional Strategy for Arboviral Disease Prevention and Control.

Etienne also stressed the importance of discussing high-cost medicines, saying they "are among the major contributors to the ever-increasing healthcare costs borne by governments, families and individuals, and these exorbitant costs can negatively impede progress towards universal health."

Ecuador Minister Margarita Guevara thanked the countries of the region and PAHO for their quick response and support after the earthquake that struck her country in April.