In the Americas, viral hepatitis causes more than 125,000 deaths each year, with most of the deaths due to Hepatitis B and C. But with appropriate treatment, 90 percent of those infected with Hepatitis C can be cured, and vaccination can prevent transmission of Hepatitis B from mother to child.

Washington, D.C./Geneva, July 27, 2016 (PAHO/WHO) - Ahead of World Hepatitis Day, 28 July 2016, WHO is urging countries to take rapid action to improve knowledge about the disease, and to increase access to testing and treatment services. Today, only 1 in 20 people with viral hepatitis know they have it. And just 1 in 100 with the disease is being treated.

Around the world 400 million people are infected with hepatitis B and C, more than 10 times the number of people living with HIV. An estimated 1.45 million people died of the disease in 2013 — up from less than a million in 1990.

In the Americas, more than 125,000 deaths each year are associated with viral hepatitis, 99% of them due to hepatitis B and C. An estimated 7.2 million people are living with chronic hepatitis C in the region, and only 25% have been diagnosed and of those only 300,000 are receiving treatment.

Due to the availability of new treatments, about 90 percent of those infected with Hepatitis C can be cured, reducing the risk of death due to liver cancer or cirrhosis. Around 2.8 million people in the region live with chronic Hepatitis B, estimates show.

"Viral hepatitis continues to be a silent epidemic, because the majority of people who have Hepatitis B or C don't know that they have it, since the infections take years to appear," explained Massimo Ghidinelli, chief of the HIV, Hepatitis, Tuberculosis and Sexually Transmitted Infections unit at PAHO/WHO. "That's why it's important for the countries to increase their efforts to widen access to diagnosis and treatment because those measures can save many lies. It's also important to inform people about these diseases and ways to prevent them," he added.

Ministers of Health from the Americas in 2015 approved a series of measures to prevent and control viral hepatitis infection, with emphasis on hepatitis B and C, as part of the Plan of Action for the Prevention and Control of Viral Hepatitis 2016-2019. The plan asks countries to create national plans to fight hepatitis, to extend vaccination against Hepatitis B to all children under 1 year old and target high-risk and vulnerable population groups, to raise public awareness through information campaigns, and to pursue options to expand access to medicines.

Hepatitis is an inflammation of the liver, most commonly caused by a viral infection by one of the five main hepatitis viruses (types A, B, C, D and E). It can result in acute infections and lead to chronic disease liver cirrhosis, cancer or even death. 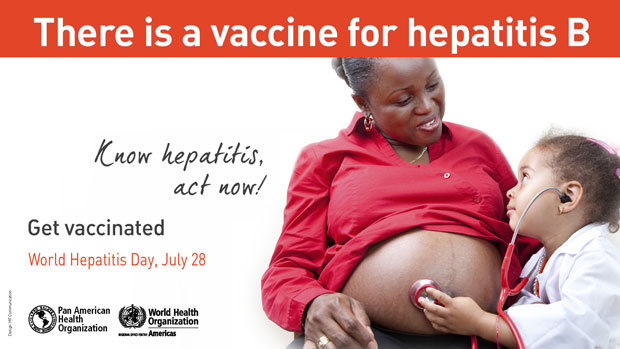 A vaccine for hepatitis B has been available since 1982. All the countries of Latin America and the Caribbean have adopted the vaccine in their national immunization programs, with coverage rates averaging 90%. In addition, more than 99% of blood units collected in these countries is screened for hepatitis B and C.

Vaccination during the first 24 hours of birth is key to prevent transmission of hepatitis B from mother to child. In Peru, for example, hepatitis is a notifiable disease, and the most important preventive measure is universal vaccination, which can prevent infection in 95 percent of the cases. To advance toward elimination of the disease, Peru's Health Ministry has intensified vaccination campaigns and diagnostic testing in the population. Its national plan aims to eliminate mother to child transmission of Hepatitis B in the next five years.

In addition, implementing blood safety strategies, including quality-assured screening of all donated blood and blood components used for transfusion, can help prevent transmission of hepatitis B and C. Safe injection practices, eliminating unnecessary and unsafe injections, can be effective strategies to protect against transmission. Harm reduction services for people who inject drugs are critical to reduce hepatitis in this population. Safer sex practices, including minimizing the number of partners and using barrier protective measures (condoms), also protect against transmission.

Some countries, however, are finding ways to get services to the people who need them. These efforts are made easier by the declining price of hepatitis C medicines. Prices are now dropping, particularly in countries that have access to generic drugs. In 2015, a preliminary analysis estimated that 300 000 people living in low- and middle-income countries had received hepatitis C treatment based on the new direct-acting antivirals.

"Early detection and access to quality medicines at accessible prices could prevent many complications such as cirrhosis and liver cancer, saving many lives and increasing the quality of life for people," Ghidinelli said. "This is the first time that we can cure a chronic viral infection since we have new medicaments with high cure rates and few adverse effects. But they are still very expensive, "he added.

In the case of Brazil, access to treatment is offered to patients with Hepatitis C through the national SUS (Sistema Único de Salud) health system. In October 2015, Brazil incorporated three new medicaments, (daclatasvir, simeprevir and sofosbuvir) in its health system, improving the cure rate of the disease by more than 90 percent.

With help from PAHO/WHO, the Mercosur countries are negotiating joint purchases of these medicaments to obtain them at affordable prices, through the PAHO Strategic Fund. PAHO is also providing technical support to develop new clinical protocols.