New report shows traffic fatalities are up in the Americas, primarily among motorcyclists. To reverse the trend, PAHO/WHO recommends adoption and enforcement of laws related to five key risk factors: speed, drinking and driving, and the use of motorcycle helmets, seatbelts and child restraints.

Washington, D.C., 13 September 2016 (PAHO/WHO) - Deaths from road traffic injuries, mainly among motorcyclists, increased by 3% in the Americas between 2010 and 2013, according to the new Report on Road Safety in the Region of the Americas, published by the Pan American Health Organization (PAHO), Regional Office of the World Health Organization (WHO). To reverse this trend, PAHO is urging countries to strengthen their road safety legislation and enforcement. 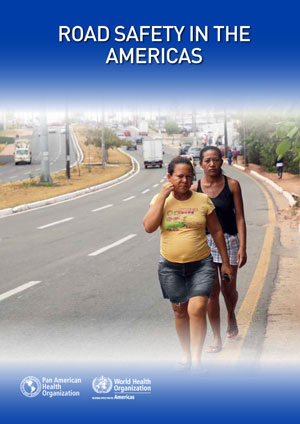 The new report provides a snapshot of the road safety situation in 31 countries and territories of the Western Hemisphere, based on the latest available data. It shows that more than 154,000 people died as a result of traffic-related injuries in the Americas in 2013. This represents nearly 12% of all traffic-related deaths at the global level, where  traffic injuries are the leading cause of death among young people ages 15 to 29,  particularly among men (73%).

"Road traffic crashes continue to cause too many preventable injuries and deaths and place a heavy load on healthcare services," said PAHO Director Carissa F. Etienne. "Strong and sustained enforcement of effective laws and public awareness campaigns are vital to reduce this burden."

Road safety laws improve road user behavior and reduce road traffic crashes, injuries and deaths. The report says that countries have generally not done enough to implement the five key measures that are known to be most effective: maximum speed limits of 50 km/h in urban areas, required seat-belt use for all vehicle occupants, blood alcohol limits of no more than 0.05g/dl for drivers, mandated helmet use for all motorcycle riders, and required use of child restraints in vehicles.

Highlights from the report include:

Almost half of all road deaths in the Americas are among those users with the least protection: motorcyclists (who represent 20% of traffic deaths), pedestrians (22%) and cyclists (3%).

Deaths among motorcyclists grew the most among traffic fatalities. The report finds that motorcycle deaths rose from 15% to 20% of all road deaths between 2010 and 2013. However, when examined by subregion, nearly half (47%) of traffic-related deaths in the Spanish-speaking Caribbean (Cuba and the Dominican Republic) involved motorcyclists. This increase is associated with the hemisphere's expanding motorcycle fleet, which almost doubled from 2007 to 2013, rising from 6% to 11% of all motor vehicles.

"Rapid urbanization, the need to get around quickly, and improved economic growth in some countries have contributed to the fact that people who previously walked now ride a motorcycle," said Eugenia Rodrigues, PAHO's Regional Advisor on Road Safety. "Having a safe, affordable and efficient public transportation system and good infrastructure, with sidewalks, traffic lights, footpaths, and crossings, is key to protect health and also to increase people's physical activity."

The Decade of Action for Road Safety (2011-2020) calls on countries to implement internationally identified measures to make their roads safer. PAHO monitors progress through its regional report, while WHO monitors the global situation through its Global Status Report on Road Safety series.

In September 2015, heads of state attending the United Nations General Assembly adopted the historic Sustainable Development Goals (SDGs), which includes a target (3.6) to halve the global number of deaths and injuries from road traffic crashes by 2020.

"While progress has been achieved in recent years, much more needs to be done to galvanize urgent action and to save more lives," noted Etienne.

PAHO/WHO works with the countries of the Americas to move towards attaining the Sustainable Development Goals on road safety and to implement its Plan of Action on Road Safety (2012-2017) and the commitments of the Decade of Action for Road Safety 2011-2020. In this regard, PAHO/WHO works to strengthen the role of the health sector in road safety, prevent road traffic injuries, give technical assistance for adopting and implementing good traffic laws, and advise on the adoption of road safety strategies that can save lives.