Washington, D.C., 26 September 2016 (PAHO/WHO) - The Zika epidemic has presented a major challenge for the Region of the Americas over the past year. But countries have largely risen to that challenge through effective collaboration and with guidance and coordination from the Pan American Health Organization (PAHO), Regional Office for the Americas of the World Health Organization (WHO), health leaders said today during the 55th PAHO Directing Council. 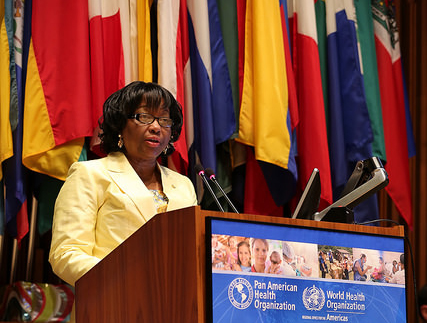 "We have achieved much over these past 12 months, despite the numerous and newly emerging challenges that we have encountered along the way," said PAHO/WHO Director Carissa F. Etienne. "I have absolutely no doubt that these achievements were made possible because of the hard work of PAHO/WHO staff in catalyzing public health action, the unwavering political and financial commitments of governments, the unstinting dedication and persistent work of healthcare workers in all of our Member States, and the synergistic contributions of our numerous partners, donors, and nongovernmental organizations who together have contributed to extend the reach of our technical cooperation."

Etienne's remarks came during the opening session of the 55th Directing Council, which is being held this week at PAHO/WHO headquarters in Washington, D.C. The meeting brings together health ministers and other high-level delegates from throughout the Americas to discuss major public health challenges and to set priorities for action to address them. Special guests at the opening session included WHO Director General Margaret Chan and U.S. Secretary of Health and Human Services Sylvia Mathews Burwell. 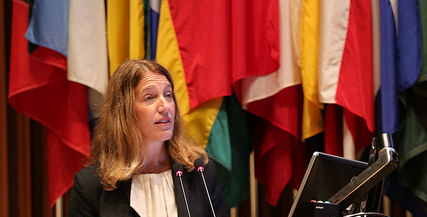 Burwell said the Zika epidemic has kept the United States "working around the clock" to respond to the virus and to minimize its impact. She noted that significant progress has been made by countries working together.

"We've partnered with academic centers in Latin America and the Caribbean to learn about the risk an infection of the Zika virus poses to a pregnant woman and her child," noted Burwell. "Recently we launched a major international study called Zika in Infants and Pregnancy, or ZIP, that's under way in countries and territories facing active transmission of the virus now. We're committed to working closely with PAHO to help our entire region collectively respond to this virus."

She urged similar international cooperation to confront drug abuse, which has resulted in a growing number of deaths in the United States, particularly from overdoses of prescription drugs and illicit opioids.

WHO Director General Margaret Chan praised the response by Brazil and other countries of the Americas to the Zika epidemic, adding that the Region has performed a service to the rest of the world.

"Apart from responding to the outbreaks, your countries have contributed greatly to scientific understanding of the virus, its modes of transmission, and its consequences, especially for the developing fetus," said Chan. "Thanks to your research, scientific evidence has confirmed a causative association between Zika infection during pregnancy and microcephaly and other severe congenital abnormalities."

She added, "The world will be looking to the Americas for guidance on whether some of the new technologies for mosquito control, such as the use of mosquitoes infected with Wolbachia bacteria, hold promise for wide-scale use."

In addition to Zika, countries in the Americas have had to face a number of other health emergencies over the past year, including a 7.8-magnitude earthquake in Ecuador, a hurricane and tropical storms in the Caribbean, and severe flooding and a nutrition crisis as a result of the El Nino weather phenomenon. To help countries better cope with these and other health emergencies, Etienne noted that both PAHO and WHO have recently created new programs specifically to provide leadership and coordination during health emergencies.

Etienne also pointed to ongoing non-emergency health challenges facing the countries of the Americas, including growing antimicrobial resistance, social and economic inequity, and aging populations. Meeting those challenges will require continuing regional collaboration but also country-level action and investments to ensure that health systems are "fit for the future."

"Building a few more hospitals alone will not result in improved health for any nation," said Etienne. "We must revisit our health system structures and financing if we are to make tangible progress towards universal access to health and universal health coverage and ensure the long-term sustainability of our health systems."

Delegates to this week's meeting will discuss strategies and plans of action on prevention and control of arboviruses such as Zika, dengue and chikungunya; elimination of malaria and neglected diseases; disaster risk reduction; and prevention and control of HIV and sexually transmitted infections. Other subjects on the agenda include migrant health and resilient health systems.

Other participants in the opening session of the 55th PAHO Directing Council included Minister of Health Elvia Violeta Menjívar of El Salvador, the outgoing President of PAHO's 54th Directing Council; Ferdinando Regalia, Chief of the Division of Social Protection and Health at the Inter-American Development Bank (IDB); and Ideli Salvatti, Secretary for Access to Rights and Equity at the Organization of American States (OAS).