Washington, D.C., 27 September 2016 (PAHO/WHO) - The Pan American Health Organization/World Health Organization (PAHO/WHO) and the ministers of health of Brazil and Cuba signed two agreements that renew the technical cooperation program known as Mais Medicos for a period of three years. The agreements were signed  during the 55th PAHO Directing Council meeting this week in Washington, D.C.

"It is not surprising that the Mais Medicos program has captured the interest of other countries in the Region," said Etienne.

She thanked the governments of Brazil and Cuba for asking PAHO/WHO to play a role in making the program possible and in ensuring that the people of Brazil have access to quality primary health care. 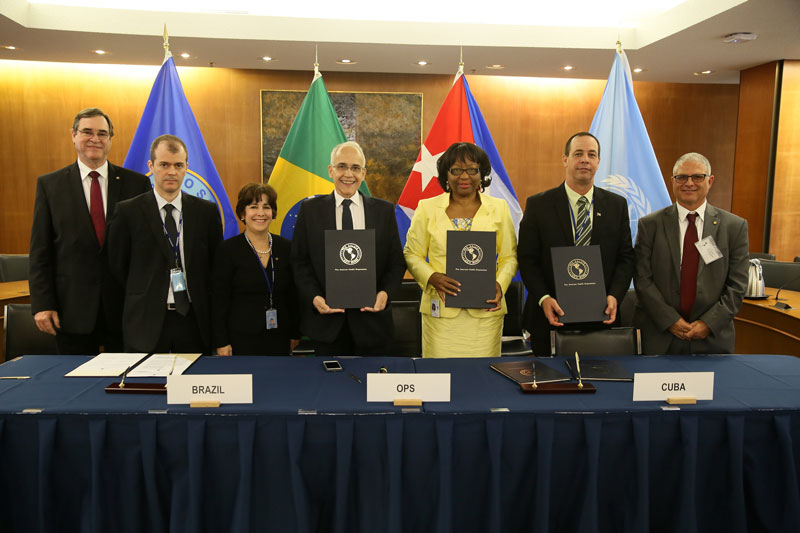 PAHO/WHO Representative in Brazil Joaquín Molina said the program has helped millions of Brazilians. "The renewal of the Mais Medicos program after its first three years reflects the recognition of its important value and its benefit for both Cuban cooperation and the Brazilian health system. It is a project of major proportions, with 11,400 doctors mobilized by PAHO/WHO."

Vice-minister of Health of Cuba José Angel Portal Miranda said Mais Medicos "shows the value of medical cooperation to improve the health of the population." Antonio Carlos Figueiredo Nardi, executive secretary of Brazil's Ministry of Health, said the initiative "is an extraordinary partnership that changes lives." He added that the program's "tremendous impact" has included increasing the number of patient consultations and significantly reducing the need for people to go to hospitals to receive health care.

The Mais Medicos program was created in 2013 by the Government of Brazil to redress the shortage of doctors in communities in the country's interior and on the outskirts of major cities. PAHO/WHO's country office in Brazil has supported the initiative by mobilizing doctors from Cuba to work in formerly underserved health centers. The program has to date filled 18,240 vacancies in 4,085 municipalities and 34 Special Indigenous Health Districts. Of these vacancies, 11,429 were filled by Cuban health professionals.

Cuban doctors in the program work in primary health care, providing care for patients with diseases including diabetes, hypertension and leprosy; promoting health education; and offering prenatal care. Cuban doctors are also involved in prevention and diagnosis of Zika virus and in follow-up care for babies with microcephaly.

A survey of some 14,000 people by Brazil's Federal University of Minas Gerais in association with the Institute for Social Political and Economic Research found overwhelmingly positive attitudes about the performance of Brazilian and foreign doctors in the Mais Medicos program. Of those surveyed, 81% were low-income and 95% said they were satisfied with the program. The average level of satisfaction expressed by all respondents was 8.4 points out of 10, and for indigenous respondents, 8.7.