Washington, October 7, 2016 (PAHO/WHO)-The Pan American Health Organization (PAHO) expects an important upsurge in cholera cases in Haiti after Hurricane Matthew, given the context of flooding and the storm's impact on water and sanitation infrastructure, which is still being assessed after Hurricane Matthew struck Haiti.

More than 300 people, mainly in the southwest of Haiti, have died and some 350,000 people need assistance, according to reports from Official sources. These figures will most probably increase as the damage and needs assessment of the most affected areas are completed. 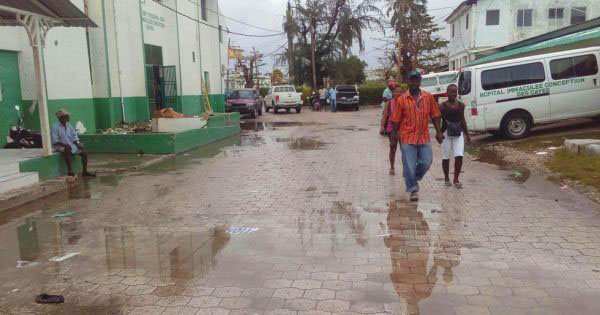 "Our field teams went to Jeremie and Les Cayes by air and report that the devastation is huge," said Dr. Jean-Luc Poncelet, PAHO's Representative in Haiti. "Many roads have been cut, most people have lost their homes and they need food, water, shelter and sanitation," he said.

In a briefing to the Global Alert and Response Network today, Dr. Sylvain Aldighieri of PAHO's Program on Health Emergencies said "We expect at least three geographic clusters of cholera outbreaks in the Southwest, in the Artibonite basin, and in the North," based on mathematical modeling of rainfall,  water patterns, displaced populations, and environmental and other factors. These are being used to help PAHO guide surveillance and interventions in treatment, water and sanitation to reduce the toll of cholera, he said.

"Water and sanitary conditions are expected to worsen due to the effects of Hurricane Matthew. Efforts were already being directed to control the current epidemic of cholera and the high levels of vector-borne and water-borne diseases, but there is a limited capacity to respond to those challenges. There is now an urgent need to significantly expand the response to prevent a surge of cholera cases and save lives," said Dr. Ciro Ugarte, who heads PAHO's Program on Health Emergencies.

From October 2010 to date, Haiti reported more than 790,000 cases of cholera with more than 9,300 deaths. At its peak in 2011, cholera cases were reaching an average of 6,766 cases every week. Although new cholera cases and deaths continue to be reported in all 10 departments in Haiti, the number of cases was significantly lowered from over 300,000 in 2011 to about 36,000 in 2015 thanks to intensified prevention and control efforts from national and international actors.

Already in 2016,an average of 771 new cases of cholera is being reported every week, with 28,559 total cases reported through mid-September, before the hurricane struck. . Multiple localized outbreaks resulted in Red Alert notifications for 14 municipalities in the four departments of Grande Anse, Ouest, Artibonite and Nord.

PAHO has supported Haiti's Ministry of Public Health and Population (MSPP) and the cholera response since the outset of the epidemic in October 2010, focusing on coordination, epidemiological surveillance and investigation, case management and medical treatment, and prevention measures, including water and sanitation.

PAHO-mobilized field teams have been supporting the Haiti Health Ministry's mobile response teams (EMIRA) in coordinating rapid, community-based responses to alerts and outbreaks of cholera and PAHO has promoted clean water and appropriate sanitation since the onset of the epidemic, with a special focus on health facilities.

In the four departments most affected by the hurricane, GrandAnse, Ouest, Nord-Ouest and Sud, field reports show that three of the seven hospitals are intact, two have been flooded or suffered damage, and one is still unreachable by road or telephone. The Jeremie hospital is severely damaged, and the HIC hospital in Les Cayes is damaged.