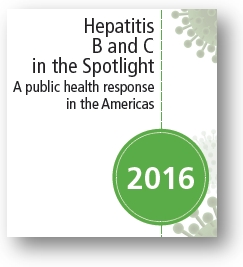 The Hepatitis B and C in the Spotlight: A public health response in the Americas report is the first to address the regional response to the viral hepatitis epidemics and to monitor the progress toward the achievement of the targets and objectives defined by the regional Plan of action for the Prevention and Control of Viral Hepatitis, approved by PAHO`s Member States in September 2015.

The report is divided in two sections: The first, updates the epidemiology of viral hepatitis B and C in the Americas through the compilation of data from multiples sources, including estimates from modeling, published systematic reviews and country reports. The second section presents the national responses to HBV and HCV using information reported to PAHO by country ministries of health.

The viral hepatitis represent an important cause of morbidity and mortality in the region. An estimated 2.8 million people live with chronic HBV in the Americas, 2.1 million of them in Latin American and the Caribbean. Regarding hepatitis C, are estimated 7.2 million people living with chronic infection, resulting in overall prevalence of 0.73% in the region. Moreover, an estimated 125,000 deaths in the Americas in 2013 were attributable to HBV and HCV.

The Region has made some advances in the response to the viral hepatitis epidemics, particularly in its effort to expand the hepatitis B vaccination. Since the introduction of the HB vaccine, every country and territory has included it in its immunization schedule for children, reaching, in 2015, 89% of coverage of the third dose of HB vaccine among children under 1 year of age in the Region. However, advances are needed in other areas, such as, political engagement in elaborating national strategies to control the viral hepatitis; strengthening of information systems; expanding of access to care and treatment  for people living with chronic viral hepatitis; identifying the needs of vulnerable population; and increasing the organized civil society involvement.

This report intends to provide national policymakers and managers, civil society advocates and partners with a basic understanding of the main issues in the response to HBV and HCV in the Region, presenting an overview of affected population and burden of the HBV and HCV epidemics in the Americas. It will also allow countries to identify major gaps and needs for improvement in their response to the viral hepatitis epidemics.