While hunger and malnutrition have fallen, overweight and obesity have greatly increased, especially among women and children.

January 19, 2017, Santiago, Chile - Obesity and overweight are on the rise throughout Latin America and the Caribbean, and are particularly prevalent among women and children, according to a new report by the Food and Agriculture Organization of the United Nations (FAO) and the Pan American Health Organization (PAHO). 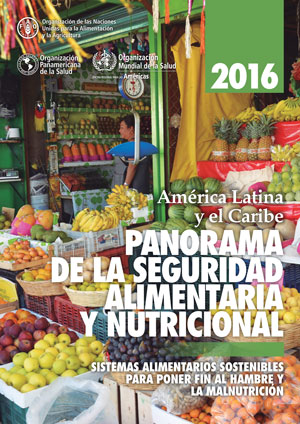 Panorama of Food and Nutrition Security in Latin America and the Caribbean, noted that close to 360 million people - around 58 percent of the inhabitants of the region - are overweight with the highest rates observed in the Bahamas (69 percent), Mexico (64 percent) and Chile (63 percent).

With the exception of Haiti (38.5 percent), Paraguay (48.5 percent) and Nicaragua (49.4 percent), overweight affects more than half the population of all countries in the region.

The report also noted obesity affects 140 million people - 23 percent of the region's population - and that the highest rates are to be found in the Caribbean countries of Barbados (36 percent) Trinidad and Tobago, Antigua and Barbuda all at around 31 percent.

The increase in obesity has disproportionately impacted women: in more than 20 countries in Latin America and the Caribbean, the rate of female obesity is 10 percentage points higher than that of men.

According to FAO's a.i. Regional Representative Eve Crowley, "The alarming rates of overweight and obesity in Latin America and the Caribbean should act as a wake up call to governments in the region to introduce policies that address all forms of hunger and malnutrition by linking food security, sustainability, agriculture, nutrition and health."

PAHO's Director Carissa F. Etienne explained that: "the region faces a double burden of malnutrition. This needs to be tackled through balanced diets that include fresh, healthy, nutritious and sustainably produced food, as well as addressing the main social factors that determine malnutrition, such as lack of access to healthy food, water and sanitation, education and health services, and social protection programs, among others."

The FAO/PAHO Panorama report points out that one of the main factors contributing to the rise of obesity and overweight has been the change in dietary patterns. Economic growth, increased urbanization, higher average incomes and the integration of the region into international markets have reduced the consumption of traditional preparations and increased consumption of ultra-processed products, a problem that has had greater impact on areas and countries that are net food importers.

To address this situation, FAO and PAHO call for the promotion of healthy and sustainable food systems that link agriculture, food, nutrition and health. To this end, countries should promote the sustainable production of fresh, safe and nutritious foods, ensuring their supply, diversity and access, especially for the most vulnerable sectors. This should be complemented with nutrition education and consumer warnings about the nutritional composition of foods high in sugar, fat and salt.

According to the report, the region has managed to reduce hunger considerably and today only 5.5 percent of the population lives undernourished, with the Caribbean being the subregion with the highest prevalence (almost 20 percent), largely due to the fact that Haiti has the highest rate of undernourished on the planet - 53 percent.

The situation concerning stunting in Latin America and the Caribbean has also improved: it fell from around 25 percent in 1990 to 11 percent in 2015, a reduction of 7.8 million children.

Despite these advances, around 6 million children are still stunted while 700,000 - 1.3 percent of children under 5 years - suffer wasting.

Virtually all countries have been successful in improving the nutrition of their children, but it should be noted that malnutrition affects the poorest and rural areas the most. "That's where governments need to focus their efforts," Crowley said.

The report shows that in Latin America and the Caribbean, around 4 million children - just over 7 percent - of children under the age of 5 are overweight. Since 1990, the largest increases in overweight among children - in terms of numbers - were seen in Mesoamerica and in terms of prevalence in the Caribbean where the rate increased from around 4 percent to almost 7.

The report noted how several governments have introduced policies aimed at improving the nutrition of their citizens. For example Barbados, Dominica and Mexico have approved taxes for sugar-sweetened beverages, while Bolivia, Chile, Peru and Ecuador have healthy food laws that regulate food advertising and/or labeling.

PAHO Director Etienne emphasized that these measures should be complemented with policies to increase the supply and access to fresh food and safe water and others focused on the strengthening of family farming as well as the development of short production and marketing circuits, public procurement programs and food and nutrition education programs.

Improving the sustainability of agriculture

According to the report, the current trajectory of regional agricultural growth is unsustainable, owing, among other factors, to the serious consequences it is having on the region's ecosystems and natural resources.

"The sustainability of our region's food supply and its future diversity is under threat, unless we change the way we do things," Crowley said, noting that 127 million tons of food are lost or wasted annually in Latin America and Caribbean.

According to FAO and PAHO, the use of land and other natural resources must be made more efficient and sustainable, the techniques of food production, storage and processing must be improved, and food losses and waste must be reduced to ensure equitable access to food for all.