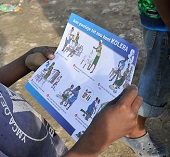 Between epidemiological week (EW) 1 and 5 of 2017, a total of 1,897 cholera cases were reported in Haiti, including 28 deaths. In the Dominican Republic, from the beginning of the year to EW 2 of 2017, there were 7 suspected cholera cases and 2 confirmed cases reported, including one death.