Washington, DC, March 15, 2017 (PAHO / WHO) -Experts on dengue and health professionals from 21 countries are exchanging experiences and best practices in diagnosis of dengue, clinical management of patients and surveillance this week, in a workshop organized by the Pan American Health Organization (PAHO), the Brazilian Ministry of Health and the Singapore Cooperation Program in Brasilia. 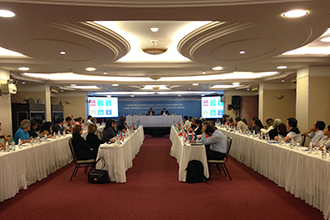 Dengue fever is the world's most widely-spread mosquito-borne viral infection, with some 390 million infections reported annually, and is a serious public health problem. It is "the disease of the century, with a very undefined distribution," noted Raman Velayudhan, the coordinator for Ecology and Vector Management at the World Health Organization (WHO).  "While malaria is declining, dengue is growing. One mosquito is replaced by another, " he said.

Velayudhan described dengue as a dynamic and at the same time neglected disease. "These vectors, Aedes aegypti and Aedes albopictus have the ability to transmit at least four diseases. Dengue is the biggest threat due to climate and environmental change, which facilitates the adaptation of vectors," he said. "These mosquitoes are able to store eggs in many different places. How can we eliminate them all? On a large scale, it will be a virtually impossible challenge, so we have to bring the population to a level of awareness for this to happen," he noted and said that WHO has been working on a number of tools and technologies to assist countries in vector control.

The first records of dengue in Latin America date back 400 years, according to José Luis San Martín, PAHO / WHO regional advisor for dengue control. "America is a continent with a long history of virus circulation. In the 1980s, there was stabilization, but this cycle has been disrupted in the last four years with the entry of Chikungunya and Zika viruses," he said. "Since then, areas that had not reported transmission began reporting cases."

According to Luis Gerardo Castellanos, head of the Neglected, Tropical and Vector-Borne Diseases Unit at PAHO / WHO, the organization focuses its efforts on people living in conditions of vulnerability and extreme poverty in the Americas. "Dengue is a problem of generations, which challenges us more and more. We have to be stronger than this vector and this disease," he said.

Castellanos said the meeting of the countries of Latin America, the Caribbean and Asia is an enriching initiative in terms of public health. "We have to share the best practices that our countries have accumulated over time" to strengthen the fight against this disease, he said.

The general coordinator of the National Program for the Control and Prevention of Malaria and Diseases Transmitted by Aedes of the Brazilian Ministry of Health, Divino Valero Martins, explained the situation in his country:  "We are going through difficult times, mainly due to the capacity of Aedes for new arboviruses." One of the concerns expressed was related to the infestation of Aedes, which is already present in up to 80% of Brazilian municipalities. "We have simultaneous circulation of the three arboviruses, dengue, chikungunya and Zika. The similarity between them raises questions from the clinical and laboratory points of view, since the results are often crossed," he said.

Martins said issues such as inadequate basic sanitation, disorderly urban expansion, high population density in cities, and irregularities in water supply and domestic waste disposal are responsible for about 80 percent of mosquito foci. These factors contribute to the propagation of arboviruses, and are essential to help understand how complex it is to carry out vector control in a more integrated way.  "We have to reconsider our policies. We need various measures from all sectors to combat dengue," he said.

Siew Fei CHIN, Head of Mission and Chargé d'Affaires of the Embassy of the Republic of Singapore in Brasilia, spoke about how her country is tackling the main dengue transmitter, the Aedes mosquitoes. "We are testing new methods of vector control, such as the use of male Aedes mosquito carrying the Wolbachia bacteria, which is expected to complement current efforts in reducing Aedes mosquitoes in the community," she said. "We are happy to share what we have learnt. We hope that the exchange of ideas and information will benefit all countries," she said.

The first International Asia-Latin America Workshop on Diagnosis, Clinical Management and Dengue Surveillance, which ends on March 16, was cited as an opportunity for learning and exchange for health professionals in the region, where the diagnosis of dengue has become more complex since 2013 due to the circulation of other arboviruses such as Zika and chikungunya, which present similar clinical pictures.