World No Tobacco Day, May 31 2010: Gender and tobacco  with an emphasis on marketing to women 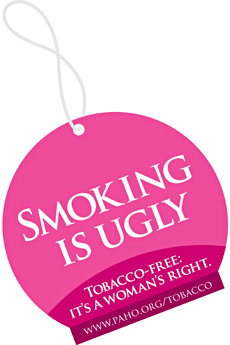 The tobacco industry constantly and aggressively seeks new users to replace the ones who quit and the current users - up to half - who will die prematurely from cancer, heart attack, stroke, emphysema or other tobacco-related disease.

Among the industry's many targets of opportunity, women constitute one of the biggest. That's because fewer women than men smoke or chew tobacco. Only about 9% of women smoke, compared with 40% of men. Of the world's over 1 billion smokers, only about 200 million are women.

With women, the industry simply has more room to expand.

The future character of the global tobacco epidemic among women can be seen in the habits of girls today. In half of the 151 countries surveyed for trends in smoking among young people, roughly as many girls smoked cigarettes as boys. In some countries, more girls smoked than boys. Teenagers who smoke are likely to become regular smokers in adulthood.

Of the over five million people who die each year from tobacco use, approximately 1.5 million are women. Unless urgent action is taken, tobacco use could kill more than eight million people by 2030, of whom 2.5 million would be women. Approximately three-quarters of these female deaths would occur in the low-income and middle-income countries that are least able to absorb such losses. Every one of these premature deaths would have been avoidable.

In some countries, the bigger threat to women is from exposure to the smoke of others, particularly men. For example, in China, where one-third of the world's adult smokers live, the tobacco epidemic is almost entirely a male phenomenon. Less than 3% of women in China smoke. Yet more than half of Chinese women of reproductive age are regularly exposed to second-hand smoke. Worldwide, of the 430,000 adult deaths caused every year by second-hand smoke, 64% occur in women.

World No Tobacco Day 2010 focuses on the harm which tobacco marketing and smoke do to women. At the same time, it seeks to make men more aware of their responsibility to avoid smoking around the women with whom they live and work.

Women, and men, must be protected from tobacco industry marketing and smoke, as stated in the preamble to the WHO Framework Convention on Tobacco Control. In effect since 2005, this international treaty acknowledges "the increase in smoking and other forms of tobacco consumption by women and young girls worldwide" and explicitly recognizes "the need for gender-specific tobacco control strategies".

Controlling the epidemic of tobacco among women is an important part of any tobacco control strategy. As WHO Director-General Margaret Chan has said, "Protecting and promoting the health of women is crucial to health and development - not only for the citizens of today but also for those of future generations".

Now is the time to act.

Women are at great risk

The epidemic of tobacco use manifests itself differently among women

Call to the public

Leading cause of death, illness and impoverishment

Tobacco use is one of the biggest public health threats the world has ever faced. It kills more than five million people a year - an average of one person every six seconds - and accounts for one in 10 adult deaths. Up to half of current users will eventually die of a tobacco-related disease.

More than 80% of the one billion smokers worldwide live in low- and middle-income countries, where the burden of tobacco-related illness and death is heaviest.

Tobacco users who die prematurely deprive their families of income, raise the cost of health care and hinder economic development.

In some countries, children from poor households are frequently employed in tobacco farming to provide family income. These children are especially vulnerable to "green tobacco sickness", which is caused by the nicotine that is absorbed through the skin from the handling of wet tobacco leaves.

Because there is a lag of several years between when people start using tobacco and when their health suffers, the epidemic of tobacco-related disease and death has just begun.

Good monitoring tracks the size and character of the epidemic and indicates how best to tailor policies. Two-thirds of countries - more than four in five of them low- and middle-income- do not have even minimal information about tobacco use.

Second-hand smoke is the smoke that fills restaurants, offices or other enclosed spaces when people burn tobacco products such as cigarettes, bidis and water pipes. There is no safe level of second-hand tobacco smoke.

Every person should be able to breathe smoke-free air. Smoke-free laws protect the health of non-smokers, are popular, do not harm business and encourage smokers to quit.1

Studies show that few people understand the specific health risks of tobacco use. For example, a 2009 survey in China revealed that only 37% of smokers knew that smoking causes coronary heart disease and only 17% knew that it causes stroke.2

Among smokers who are aware of the dangers of tobacco, most want to quit. Counselling and medication can more than double the chance that a smoker who tries to quit will succeed.

Hard-hitting anti-tobacco advertisements and graphic pack warnings - especially those that include pictures - reduce the number of children who begin smoking and increase the number of smokers who quit.

Studies carried out after the implementation of pictorial package warnings in Brazil , Canada , Singapore and Thailand consistently show that pictorial warnings significantly increase people's awareness of the harms of tobacco use.

WHO is committed to fight the global tobacco epidemic. The WHO Framework Convention on Tobacco Control entered into force in February 2005. Since then, it has become one of the most widely embraced treaties in the history of the United Nations with nearly 170 Parties covering 86% of the world's population. The WHO Framework Convention is WHO's most important tobacco control tool and a milestone in the promotion of public health. It is an evidence-based treaty that reaffirms the right of people to the highest standard of health, provides legal dimensions for international health cooperation and sets high standards for compliance.

In 2008, WHO introduced the MPOWER package of tobacco control measures to further counter the epidemic and to help countries to implement the WHO Framework Convention. The six MPOWER measures are:

May 31 was designated as World No Tobacco Day (WNTD) by the Member States of the World Health Organization in 1987 to stress the importance to fight against the tobacco epidemic, and to reduce the preventable death and diseases caused by its consumption.

Each year, a specific theme is highlighted. Materials and activities focused on the theme are designed to raise awareness of the dangers of using tobacco, the business practices of tobacco companies, what WHO is doing to fight the tobacco epidemic, and what people around the world can do to claim their right to health and healthy living and to protect future generations.