Washington, D.C., 2 May 2017 (PAHO/WHO) - The Director of the Pan American Health Organization (PAHO), Carissa F. Etienne, urged ambassadors to the Organization of American States (OAS) to become partners in advocating for health as a pillar of social and economic development. 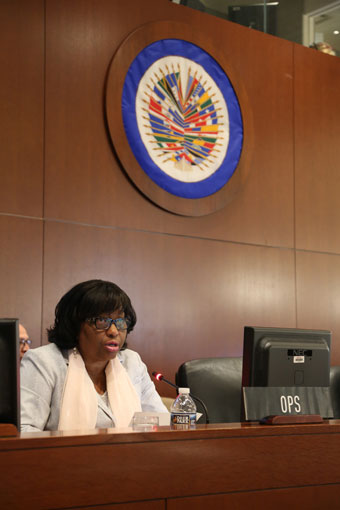 "Investing in health is a wise investment, as it lays the foundation for future prosperity," said Etienne. "So I would ask you to please help us keep health high on the development agenda of your countries."

Etienne was at the OAS on to update members of the Permanent Council on recent health developments in the Americas and on PAHO's technical cooperation in health with member countries over the past 18 months.

One of the major health milestones during this period was the formal verification of the elimination of endemic measles transmission in the Americas, an achievement that culminated 22 years of coordinated immunization efforts by PAHO and its Member States.

"Our Region's achievement of measles elimination is all the more impressive because the Americas is the world's first WHO region to reach this goal," said Etienne, noting that the Americas was also the first region to eliminate smallpox, poliomyelitis, and, in 2015, rubella and congenital rubella syndrome. She said maintaining high vaccination coverage rates in the region is essential to protect these achievements.

Etienne also described the region's recent progress toward the elimination of mother-to-child transmission of HIV and syphilis. In 2016, Cuba became the first country in the world to be validated as having attained this goal. Since then, 21 countries and territories in the Americas have reported data consistent with elimination. Last month, two of these - Anguilla and Montserrat - received WHO certification of having reached the elimination goal.

In 2016, Guatemala became the fourth country in the world to eliminate onchocerciasis, also known as river blindness, joining Colombia, Ecuador, and Mexico, which also eliminated river blindness during the past four years.

The countries of the Americas have also faced serious challenges over the past 18 months, the most significant of which was the Zika epidemic. Etienne described the epidemic as "an unprecedented disease event that occupied much of our attention during 2016."

PAHO took a proactive role in coordinating and facilitating the regional response to the epidemic, tracking the spread of the virus, providing technical support and guidance, mobilizing resources and expertise, and developing recommendations based on the best scientific knowledge available. PAHO mobilized more than $7 million to support countries' responses to the epidemic and sent technical field missions with over 170 staff and experts to 30 countries and territories.

While the Zika epidemic appears to have peaked, the virus presents a "continuing challenge to countries' health systems and services, which must provide care and support for affected children and their families," said Etienne. She added that the Zika outbreak "has once again brought into sharp focus the need for stronger, resilient health systems and the importance of achieving universal health access and coverage."

Etienne said the pursuit of universal health is today the "overarching framework" for all of PAHO's technical cooperation with its Member States. But achieving universal health requires greater investment in health. Based on global evidence, countries need to spend a minimum of 6% of GDP on health in order to achieve universal health. Currently only five countries in the Americas have reached that target.

"I appeal to you to advocate with your governments for increased funding for health," Etienne told her audience.

There are good reasons, both moral and socioeconomic, for this. A growing body of research points to universal health coverage as a "high-impact, inequality-reducing strategy," and development economists have shown that reducing inequality has a positive impact on economic growth.

"While there are many ethical and public health arguments in support of universal health," said Etienne, "we must also recognize the important contribution of health to economic growth and the potential for increased access to quality health services to help accelerate economic progress."