Voluntary blood donors are increasing, but the numbers are not enough to ensure sufficient blood supplies

A new PAHO report on blood supply shows that less than half of those who give blood in Latin America and the Caribbean do so, on an altruistic basis.

Washington, DC, June 12, 2017 (PAHO / WHO) - Less than half of blood donors are volunteers in Latin America and the Caribbean, according to a report released today by the Pan American Health Organization (PAHO), before World Blood Donor Day is celebrated June 14. 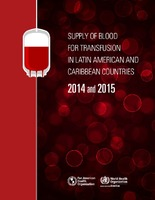 The new report, Supply of Blood for Transfusion in Latin American and Caribbean Countries, 2014 and 2015, shows that while the percentage of voluntary blood donors grew from 38.5% to 44.1% between 2013 and 2015 in the region, it is still far from reaching the 100% level recommended by the World Health Organization (WHO) to ensure a sufficient and safe blood supply for transfusions.

"Everyone has the right to expect the blood they need to be available when needed. Unfortunately, many still suffer unnecessarily or even die because they do not have access to a safe and timely blood transfusion," said PAHO / WHO Director Carissa F. Etienne.  "Universal access to safe and quality blood is essential if we are to provide comprehensive health care for all," she added.

"We need to change the culture of a single donation motivated by urgency to a culture based on repeated, altruistic donation," said PAHO / WHO Regional Blood Services and Transplants Advisor, María Dolores Pérez-Rosales. "Only then will the blood banks of the countries of the region be able to achieve self-sufficiency and ensure that access to blood for transfusions is universal."

According to the report, which includes data from 36 countries in the region, only two countries from Latin America and eight from the Caribbean got all their blood donations from voluntary unpaid donors. These are Cuba and Nicaragua, and Aruba, Bermuda, Cayman Islands, Curacao, Guadeloupe, Guyana, Martinique and Suriname.

The report also presents data on the profile of donors. Of the total donors in 2015 in both Latin America and the Caribbean, about 62% were men and 38% women. According to information presented by 12 Caribbean countries, the majority of donors (48%) are between 24 and 44 years old, while in Latin America, according to data from six countries, the largest number of donors (43%) is between 18 And 24 years old.

Other findings in the report show that more countries today, 14 compared to 6 countries in 2011, are now aware of their blood needs at the national level, which facilitates collection planning. In addition, almost all countries achieved 100% blood screening for infections that can be transmitted by transfusion. Currently, 23 countries in the region (14 Latin America and 9 in the Caribbean) have a national blood policy, 5 more countries than in 2011.

On 14 June each year, World Blood Donor Day is celebrated to raise awareness of the need for safe blood and blood components and to thank donors for a gift that saves lives. This year's campaign focuses on blood donation during emergencies, when demand for blood transfusions increases, as well as the population's interest in helping. This is why this year's slogan is "What can you do? Donate blood. Donate now. Donate often."

Blood transfusions are an essential component of emergency medical care. Adequate blood supply during emergencies requires a well-organized blood transfusion service, which can only be ensured with the collaboration of the entire community and with a donor population committed to voluntary unpaid donations throughout the year.

The Andean Health Organization - Hipólito Unanue Convention (ORAS - CONHU), headquartered in Lima, Peru will host the regional event on June 14 at 9 am (Peru time), is. The activity can be followed in through: www.livestream.com/paho

The organization was chosen in recognition of recent work by the countries that make up the Andean sub region to form the Andean Sub regional Safe Blood Commission, and the approval in 2015 of the Andean Universal Access to Safe Blood Plan 2016-2020.