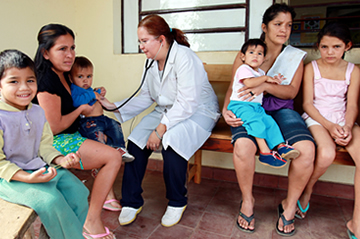 Washington, DC, June 2017 (PAHO/WHO) - The Executive Committee of the Pan American Health Organization (PAHO) adopted the strategy for human resources for universal access to health and universal health coverage during a week of deliberations with progress on a number of strategies, action plans and policies on key health challenges facing countries in the Americas.

The members of the committee approved the proposal strategy for human resources for universal health (document CE160/18 Strategy on Human Resources for Universal Access to Health and Universal Health Coverage), as well as its respective Resolution. The approval of this initiative means that it will be included in the agenda of the 29th Pan American Sanitary Conference of PAHO that will meet from September 25 to 29, 2017.

The strategy is intended to guide national policies on human resources for health, taking into account that the availability, accessibility, acceptability, relevance, and competence of human resources in the health sector are key components for achieving the objectives of universal health and the 2030 Agenda for Sustainable Development.

Also, the strategy proposes the strategic lines and interventions which should guide Member States in developing human resources policies and plans, in accordance with the national context and in collaboration with the Pan American Sanitary Bureau and other partners.

The Executive Committee also discussed policies and reports on ethics and health policy issues. "We stand together in our collective commitment to fight the multiple forms of discrimination and exclusion suffered by these groups. We recognized that an important characteristic of a resilient health system would be its capacity to articulate and effectively address the health needs of these populations, ensuring that no one is left behind," said Carissa F. Etienne, Director of PAHO.

The Executive Committee is responsible for developing and approving the agenda for the Pan American Sanitary Conference and the Directing Council of PAHO. It is composed of nine Member States elected for overlapping three-year periods. It meets twice a year, or at the special request of the Director of PAHO or at least three Member States. Current members are Antigua and Barbuda, Argentina, Brazil, Chile, Colombia, Guatemala, Panama, Trinidad and Tobago, and the United States.